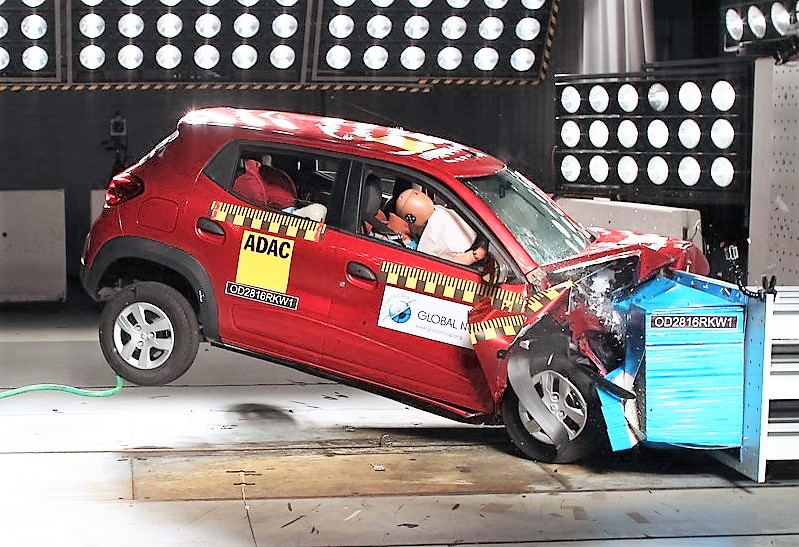 Entry level small cars have always been at the receiving end when it comes to criticism towards safety. To make the product affordable, manufacturers often try to cut costs by using less expensive raw materials. This obviously has a direct impact on the safety quotient of the finished product. The Renault Kwid, which has a phenomenal 98% localisation, it appears, is no different.

The French manufacturer received instant success thanks to its great looks and shockingly affordable price tag. However, like others in this segment, Kwid has not been applauded for its safety. When the car was first tested by GNCAP, it received a ZERO star rating which is the lowest a car can get. To amend this, Renault brought two more versions of the Kwid which continued to return dismal 0 star ratings again. It was found that structural reinforcements were introduced only in the driver’s side.

That was the tale in April 2016 when Global NCAP tested Kwid and 5 other Indian cars. The fourth version of the Kwid – the most strengthened by the company,  was recently tested by the British car safety guys. It had a single airbag and seatbelt pretensioner for the driver seat only. The result was slightly better – ONE star!

The driver’s head and neck were saved, thanks to the airbag but the chest region showed high compression. Reinforcements continue to be only in the driver’s side but are not enough to make the structure stable. Even in terms of child safety, the rating stood at 1 star.

Renault makes safer cars in other markets. In fact, even the Kwid slated to be sold in Brasil is set to get more safety features than the Indian version. Global NCAP believes that Renault should be selling the top end variant as the standard version.

But all said and done – things won’t change unless we stop compromising safety with money. As far as we understand, no other Indian car in this entry segment has scored even a one rating so far – so that inadvertently leaves you with Kwid (airbag variant) as the safest car you can get at this price….