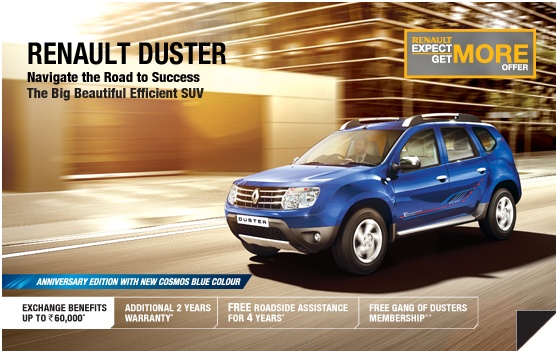 To push stuttering sales, Renault has launched the Anniversary Edition of the Duster alongside some offers for the existing variants. The offers are valid till the 31st of October.

The Anniversary edition comes wrapped up in a special, new Cosmos Blue paint scheme. On the body, the newer car gets decals that denote “1st Anniversary Edition”. However, you don’t get any other changes on the body of the car. No changes in shape. Not even addition of tidbits like chrome garnishes or snazzier alloy wheels. The interiors too remain unchanged.

The Anniversary Edition is available on the top end variant of the car, the 110 PS Diesel with RxZ option pack. Hence, it comes equipped with the MediaNav system, which combines infotainment along with the navigation features. The MediaNav system offers BlueTooth connectivity too. Apart from the above mentioned changes, the car remains the same, with the 1.5 Litre k9k Diesel engine pumping out 110 PS of peak power and 248 Nm of peak torque. It is mated to a six-speed manual tranny.

The Anniversary Edition of the Duster will be available at all Renault showrooms across India.

Renault is also offering some special offers to ramp up the sales of the existing variants of the Duster. Together, the cluster of promotional stuff is named as the “Expect More, Get More” offer. Here’s what it provides :

All these offers are valid till the 31st of this month. The exchange benefit offer for older cars comes with its strings attached; you will be entitled to it only if you book certain specified variants of the Duster.