Our site analytics speak at the top of their voice how eager people are about Duster. It is easily the most awaited car in India this year. Many dealers have started taking bookings and Duster has garnered more than 1000 bookings without the general junta having a look at it, such is the craze!

Meanwhile we enquired about Duster at their official Indian website to see how and what do they have to say. They replied the next day about its main features which we already know. And today we receive another mail from them confirming that they are on the verge of launching the car, And we all know the D-Day is 4 July!
Here is what they have to say:

We are now on the verge of launching the Renault Duster and here’s an exclusive preview of the pre-launch advertisement being released shortly. For the latest updates on the launch and commencement of bookings, kindly log on to our website – www.renault.co.in and our fanpage on facebook – facebook.com/renault.co.in or call us on 1800 300 44444 (Toll free) 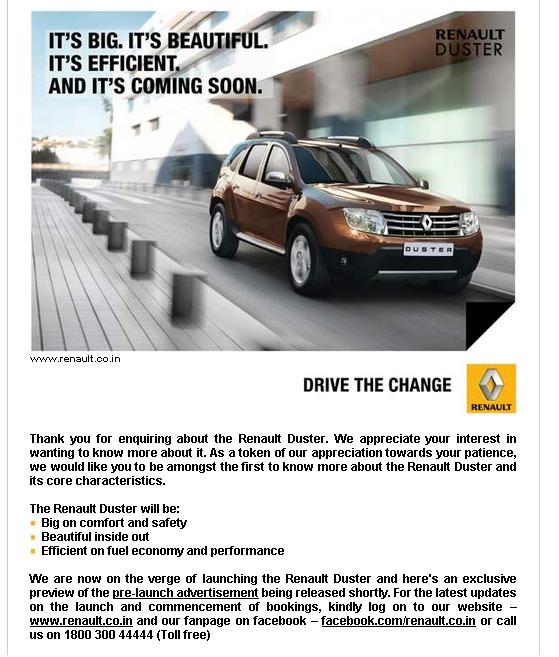 Its just a matter of a few days before the official prices would be out which would decide the fate of Duster in India. According to the speculation world, Duster is going to be priced competitively.

Meanwhile, Renault has also updated its official Indian website with the 360 degree view of Duster. Check it out at Duster’s official page

You can also see the internals and space in the car.  Meanwhile you must have already seen the pre-launch video of Duster.