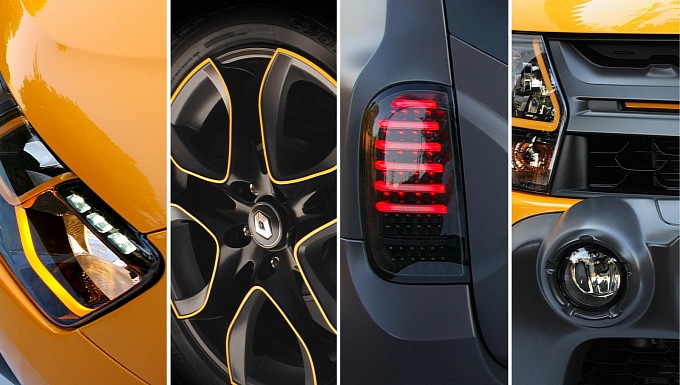 Renault has provided a glimpse of its upcoming concept car, the Duster Detour. And a Detour  it is!!

The Duster Detour will be unveiled at the Johannesburg International Motor Show on October 16. It has been sculpted in collaboration with a design studio in Johannesburg. Going by the way Renault has led us around the car, we feel it is an amalgamation of many identities. It sure will be a “spectacular show car”, as Renault has claimed. We can claim that, even by having a look at these tiny bits and pieces of the whole car.

The French automaker also suggests that it will be “a little Mad Max with a touch of the Terminator”, probably implying that it will be loaded with cutting-edge technology and will possess enough spunk to scare the wits out of the cronies from the original Mad Max flick.

We also feel the Renault Duster Detour will pack in serious off-roading capabilities, as Renault has also stated about “some Dakar dust’n dirt”. The off-roading qualities can be weaned out from the name Duster Detour itself, inviting the driver to take a detour from the staid, paved motorways and kick up some serious dust.

Few things that we could make out from the teaser :

Don’t you feel Renault should seriously start exploring opportunities for the Duster Detour in the Indian market?? We are enticed.  🙂