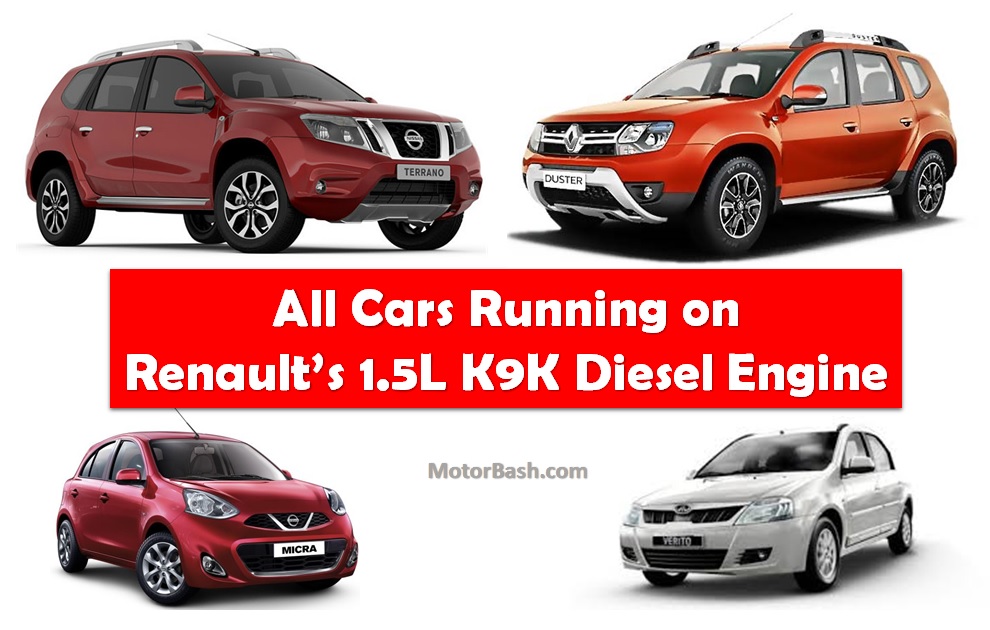 We shared a list of 21 cars that run on Fiat’s 1.3 Liter Multijet Diesel engine in India (link to the report). Apart from this, the next most popular motor in our market is Renault’s 1.5 L DCI K9K diesel engine which powers all kinds of cars including SUVs, sedans and hatchbacks.

The 1.5 liter K9K diesel engine was jointly developed by Renault and Nissan. This is a turbocharged motor and here in India, it is offered in power outputs ranging from 65 PS all the way till 110 PS.

Internationally, along with partner companies, Renault (including budget brand Dacia) and Nissan, this engine has also been used by Suzuki (on Jimny) and Mercedes (on popular models like A-Class).

List of Companies Which Use 1.5L K9K in India

Ashok Leyland also used this engine on their Stile MPV but it has been discontinued now.

Upcoming Cars/launches with this Engine

Quite clearly Duster is the most popular car which runs on this motor. It is offered in two tunes – 85 PS and 110 PS. Fluence, which is no more sold in India, was the costliest car in this list to make use of this engine. Mahindra offers the same motor on their Verito, which is nothing but reworked Logan here.

Next Read: Eight Most Fuel Efficient Cars with FE Above 26 kmpl & Price Under 10 Lakh