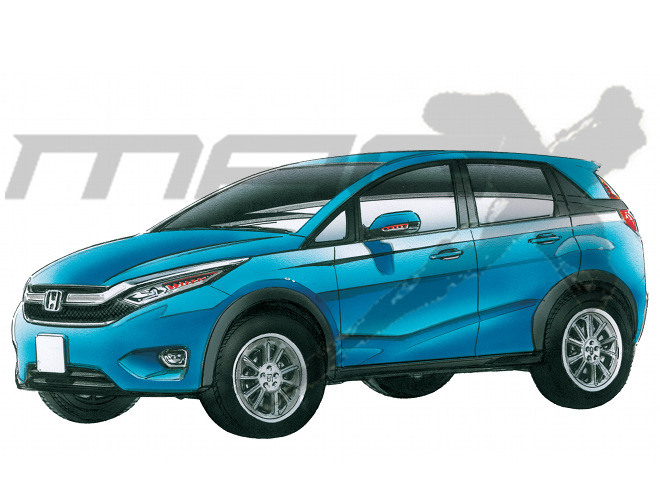 Honda is probably one of the late entrants to the compact SUV segment. The Vezel definitely got us excited but reports of Honda not considering it for India killed all our hopes!

However, what is coming to India is an apter compact SUV based on smaller Brio-platform. Now its not that Honda has never made any India specific products. The Brio and Amaze speak volumes about Honda’s commitment to India (and similar markets). Although the Vezel, alias HR-V would have been a wonderful addition to Honda’s India line up, but Honda doesn’t probably want to repeat the mistake of earlier-gen Jazz!

In an update, Japanese magazine Mag-X has shared a rendering of what we can expect from the car that will be launched in India to rival the likes of EcoSport and others, at least the designing part of it. Another Japanese website Car Sensor claims that this Brio-Based compact SUV is being developed for markets which can not be covered with Vezel, and we are definitely one of them.

A sub 4 metre SUV with the Honda emblem and a choice of ultra frugal petrol and diesel engines would surely give tough competition to the EcoSport and the Duster. The design from the rendering pic appears to be a little MPV-ish and we would expect more muscles and brawn when we talk about SUVs and crossovers.

In terms of engines, Brio-based Compact SUV may just get the 1.2L petrol motor from Brio but the more important 1.5L i-DTEC diesel engine with power figures hovering around 100PS and rated fuel efficiency figures of around 25kmpl. Along with an expected sub 4 meter size, Brio based SUV will be a ‘small’ car according to our excise duty standards.

This Brio based SUV can become the new bestseller in the segment provided Honda works on this fast. These Japanese reports suggest a launch sometime in 2017 but we are sure Honda is not-so dumbfound that they delay the product this much. We have also seen Honda keeping its products a top secret, the latest case being the new City. There were no prior details on its looks and in fact, not even a concrete spyshot! We expect more of a 2015 launch for this compact SUV.