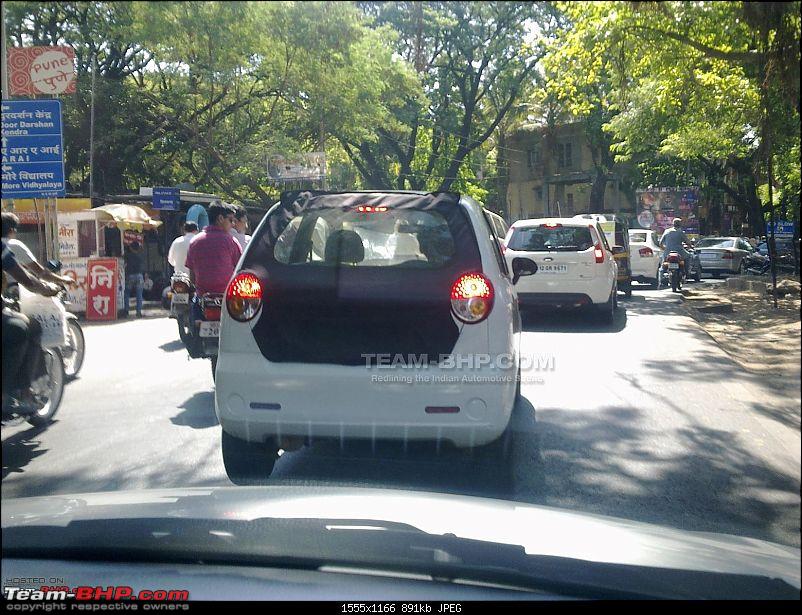 Adi_k, a Team-Bhp member has posted a facelifted Spark picture which is due sometime around September in India. These spy pics confirm that a new facelifted Spark would be making it to the roads soon.

Recently Chevrolet has also intensified its promotion of Spark on air and other mediums. Chevy is giving away the 3 year maintenance free package if you buy Spark now. Though speculations have been in the air about a diesel Spark, however, we feel this is NOT the diesel spark and rather a cosmetic facelift of the current petrol version only.

In the lone picture available, it’s only the rear which is visible under camouflage. From the pic nothing much seems to be changed apart from the tail lamps that seem to be altered a bit.

Spark was launched in 2007 in India and in this new facelift it is expected to have redesigned headlamps, taillamps, and altered bumpers along with other traditional cosmetic upgrades. With the Diesel Nano in the pipeline and revamped Maruti 800 about to make its debut later this year, this might be Chevrolet’s way of fighting it out.

Chevrolet sells our version of ‘Spark’ as Spark Lite in South African market. Would the Indian facelift be inspired from that? The rear doesn’t seem to be same. Here is a front picture of South African Spark Lite.