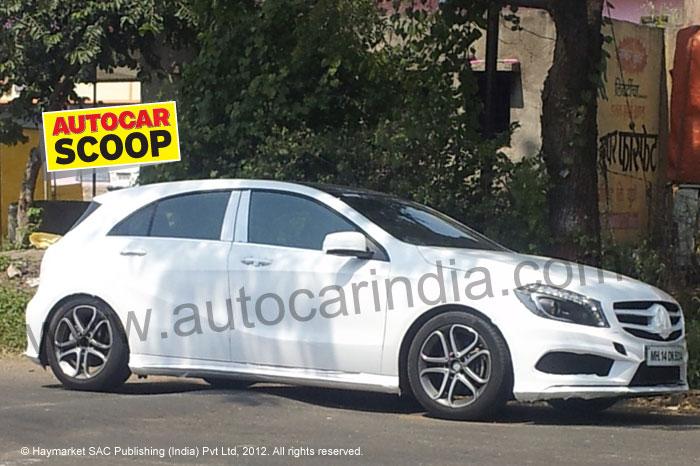 It has been in the air and it was almost certain and now we have the roaming proofs! Mercedes is readying its cheapest and the most affordable car in India, the A-Class.

AutoCar has published the first ever spy pics of the car caught testing on Indian roads. A-Class would ensure a low entry point to Mercedes to make it a more aggressive player in the Indian market. The latest A-Class is a big hatch and would sit under the Sports MPV, B-Class that Mercedes launched a couple of months back.

In India it is expected that the A200 CDI would make way which is powered by a 1.8L turbo diesel 134bhp mill which is coupled with a 7-speed dual-clutch Automatic Gearbox. The test mule we see here seems to be  loaded with AMG kit like special side-skirts and aerodynamic add-ons to the bumper. The panoramic sunroof, smaller higher profile tyres are also visible.

A-Class would be launched sometime next year as Mercedes has already confirmed that. We expect the A-Class to come at a very luring starting price tag of somewhere around 16-18 Lakh INR!

If ever you wanted to own a piece of luxury from one of the Germans, this, it has to be: Start saving!