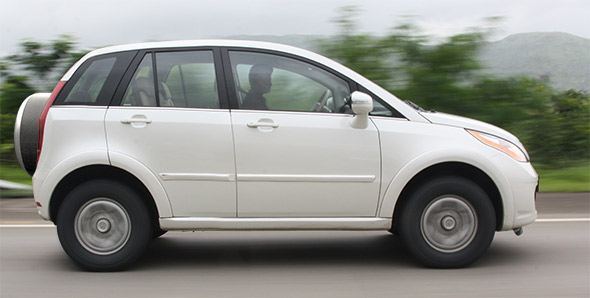 With the altered Government policies which encourage ‘smaller’ cars, utility manufacturers are jumping into the bandwagon with newer and fresher offerings.

We have seen Premier’s Rio, Mahindra’s mini Xylo aka Quanto, upcoming Ford EcoSport and a few more. The latest we hear is Tata joining the party with an unexpected model – Tata Aria.

Tata Aria is company’s premium-most passenger car product but has just not taken off as the company would have expected despite the company trying all their bits to make it sell. And if you thought its over; wait a minute! According to OverDrive, Tata is preparing a mini version of Aria!

The business logic can be derived from the success of latest utility cars like Ertiga, Quanto and a bit from Duster. Mini Aria might use older Tata Safari’s platform to ensure that the cost-effectiveness is achieved. The last row seats might get axed or find small jump seats ala Quanto.

Further, the report also speculates that if Tata plans to use a shortened Safari chassis, Mini Aria is more likely to fill under that 4 meter magical mark.

To qualify for a ‘small car’, the diesel engine should also be under 1.5L. Current Aria uses a 2.2L DICOR block. It doesn’t seem very probable that Tata might want to build up an engine under that 1.5L mark in such a short time, hence they just might use the 1.3L MultiJet diesel engine from Fiat. However, considering the huge over 2 tonne weight Aria carries with it, the biggest challenge for Tata would be to slash a major flab off the mini Aria.

What would be the final product like? Let us wait and watch as things should get unfolded pretty soon. But, are we in for one of the most spacious small crossovers in India?

What are your expectations from Mini-Aria? Do share them in the comments section below.