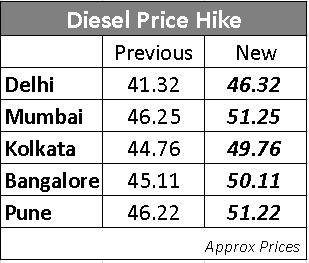 It has been in talks for many months and finally the dreaded shocker is here. From today you will need to shell out as much as 10 percent more for every liter of diesel you get filled in your car.

After a lot of hesitation, government has finally raised the prices of diesel in the country. The quantum of increase, Rs 5 per liter, is one of the steepest hikes ever in India and would definitely have widespread ramifications all across the country as diesel is one of the prime source of moving things around.

After the widening gap between petrol and diesel, India was predominantly becoming a diesel market at a rapid pace. This hike would give manufacturers a lot of cheer as people would now consider buying petrol cars again looking at the reduced difference between both the fuels.

However, the hike would not have come at a worse time than the upcoming festival season. This is the time when sentiments and market goes on a high and demand is high. Government has, however, left prices of petrol untouched which would give a little bit of respite to the common man.

Government has also restricted usage of LPG cylinders to 6.