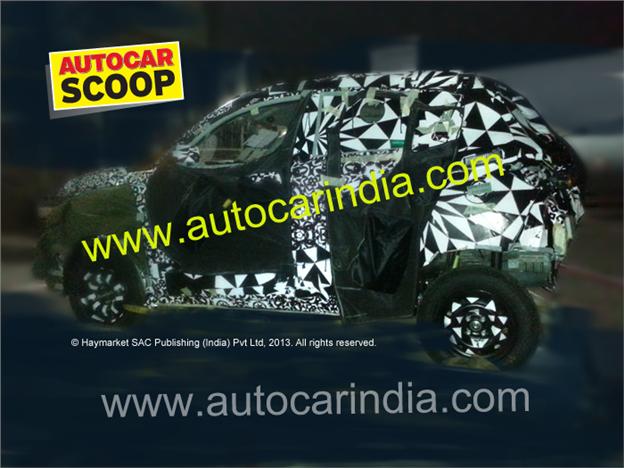 Amidst a plethora of upcoming options in the compact SUV segment, Mahindra has a new ace up their sleeve! If you though Mahindra will sit happily with Quanto in this space, this scoop from Autocar has caught us eating our nails!

AutoCar has published a spyshot of a completely camouflaged new compact SUV which is codenamed as S101. Due to the unclear pic along with down-to-the-last-bolt covering, we can not make much out of the SUV but the body proportions look rounded, higher and sportier – a possible shot at EcoSport!

But against the flat rear of Quanto, this baby SUV is flaunting a more falling rear which, though might eat up some interior space, but will be a better looker. Autocar further predicts that this compact SUV will also play in the sub 4 meter segment and will be placed under the Quanto!

This is shocking to understand, really! Quanto, itself is pretty well priced and with this Mahindra appears have a plan to eat into entry-level B-segment hatchbacks (or is it!). The presence of steel alloys (the only visible bit) also adds to the claim. However, another surprise is the possibility of this being a 6 or an 8-seater. Looking at the dimensions, this appears to be smaller for an 8-seater car; 6 might be a possibility.

No launch details are shared but considering the preparedness of the mule, it appears at least a few months away, if not a year or more! Reportedly, there will be an upmarket version of this compact SUV (S102) as well which will come with more bells and whistles.