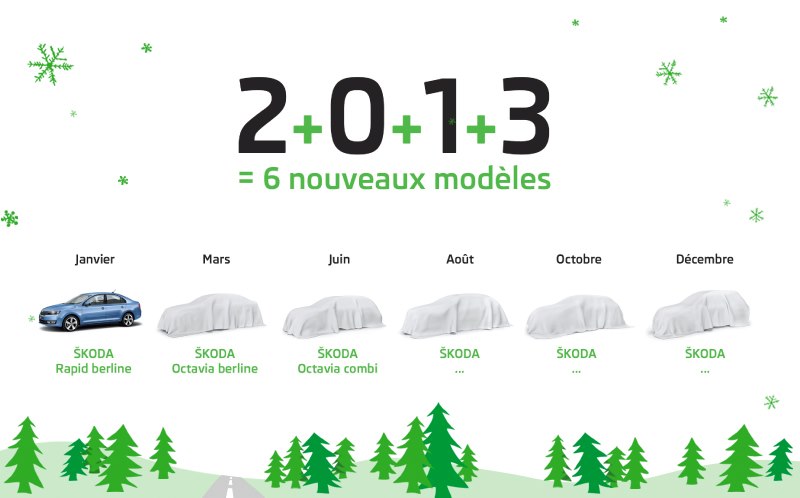 Skoda has just teased their upcoming car launches for they year 2013 and it looks like they are going to launch a new product in almost every segment.

This Czech brand is a big part of VW’s strategy of becoming the number one carmaker by 2018 and the onslaught is all set to begin this year. Skoda have showcased their armoury and are going to kickstart the new year with all guns blazing.

Skoda France has teased on their official Facebook page that there will be 6 car launches this year. The first image is of a Rapid that we all know about. The next launch due for March is the Skoda Octavia or as we know it, the Laura which shall be launched by March 2013. June will see the launch of Combi variant of the Octavia which we believe would be a Europe exclusive variant.

Now let’s talk about the launches the company has planned for August, October and December. We believe the Skoda Superb facelift, a mild refresh to the Skoda Fabia and a facelift of the Skoda Yeti crossover are the ones that will happen in the last 6 months. The Superb and Fabia will receive the last refreshes before the next generation models of the cars are launched in the next 2 years. Skoda Yeti will be the last launch from the Czech carmaker to end the year with a bang.

India will get the Superb facelift around Diwali to cash in on the festivities is what we hear of. But you can also not rule out the probability of the Yeti crossover’s facelift arriving too around that time. Talking about it, we also expect CNG versions of Skoda Rapid (Indian version) and Fabia much to the tune of Vento and Polo CNGs