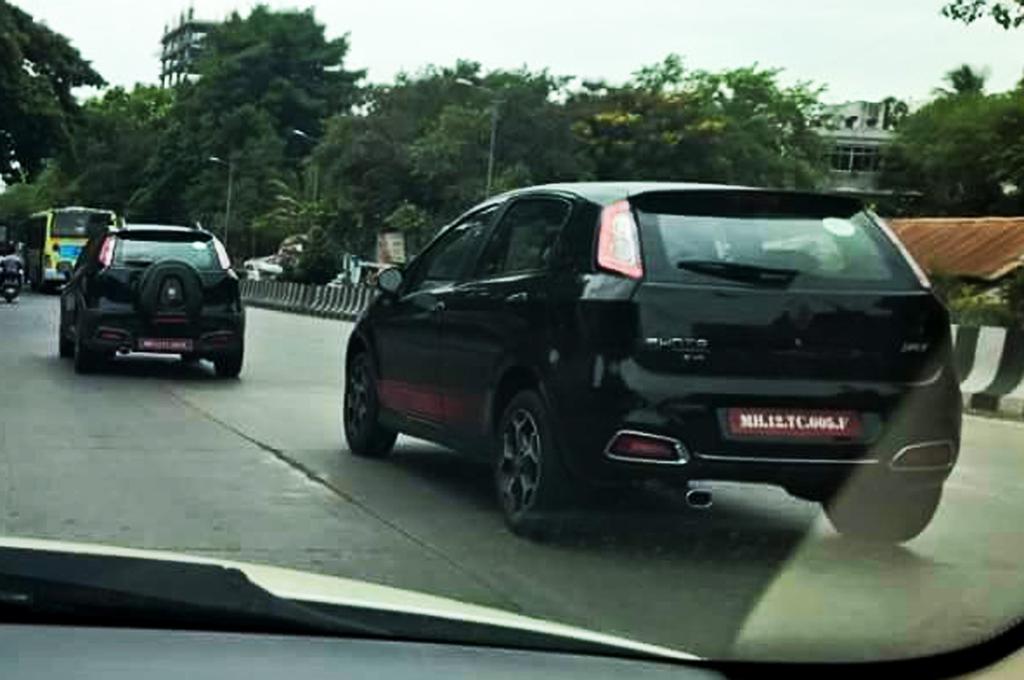 Back in Oct 2014, at the launch event of Avventura, Fiat officials hinted at the T-jet version of the crossover! A few weeks back, Punto Evo was snapped carrying the T-jet and there are clear indications that both the cars are under works and are being prepared for our market. Autocar reports that both these T-jet-ed versions will come under the Abarth brand, Fiat’s performance division.

In a new update, a smoking hot black colored test mule of Punto Evo with ABARTH stickers on the sides and T-Jet at the rear has been snapped, most probably in Pune by Akbar Merchant and the pic posted at Twitter. The spyshot also sneaks a black Avventura with red number plates, and though there is no clear evidence in sight, but leading the Punto Evo Abarth, it may just be the Avventura T-Jet. And if it is… then this will be its first spotting.

Apart from the decals on the Punto, we notice the silencer tip and the alloy wheels which are different from the regular Puntos. The 1.4 liter turbocharged T-jet motor is confirmed and since they are coming under the Abarth brand, we believe power output will be nice and high, possibly in the reported 135 hp ranges! This will make both the cars – real hot hatch and crossover respectively!

While the Avventura T-jet will gun for the EcoSport EcoBoost, Punto EVO T-Jet’s closest rival will be the much muted Polo GT TSI! Though there has been a delay in almost everything which Fiat has promised, these hot hoots will allow us to forget every sin committed by the Italians. Hope they are sensibly priced…..