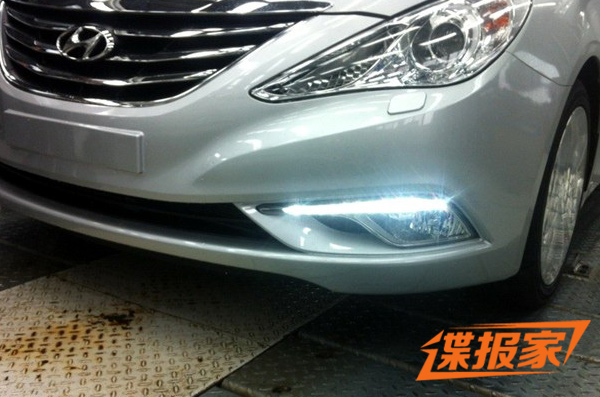 What you see here are reportedly the first spyshots of 2013 Hyundai Sonata facelift in China. At the very first glance, you are expected to pass by considering it as just the regular Sonata.

However a careful observation will reveal the minute differences in the way the car looks at you! To start with, the grille is a wee bit different. It is more slanting than upright and hence there appears a little more distance between the horizontal bars. The chrome strip at the top is also thicker and because of the new setup, the Hyundai logo looks a little more prominent. 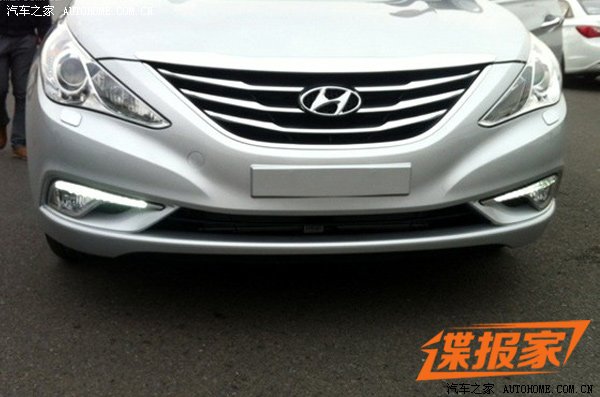 The distinguishable change is the fog lamps which now get company of new Day Time Running LED-lights. The fog lamp housing is also bigger and the front bumper has also been modified to accommodate the changes. There is a slight difference to the air dam as well. To us, the lights also appear to be slightly refreshed and all these changes lend the new 2013 Sonata slightly meaner looks.

The tyres have also been changed. However, its not clear if the there is any change in the specifications of the tyres or its only the alloy wheel design that has been changed. Further, it is also speculated that the steering wheel might also see some alterations. Sonata is powered by a combination of a 2.0L 165bhp motor along with a bigger 2.4L 180 bhp engine in China. It is expected that this facelifted 2013 Sonata will be launched very soon in the Chinese market, quite possibly in a couple of months.

This might be a minor refresh before the All-New Sonata makes way with ‘Fluidic Precision’ in 2014. Considering that Sonata has not really been a big success for Hyundai in India, will the Korean auto major also consider this refresh on our local version? A wait will only tell us about it!