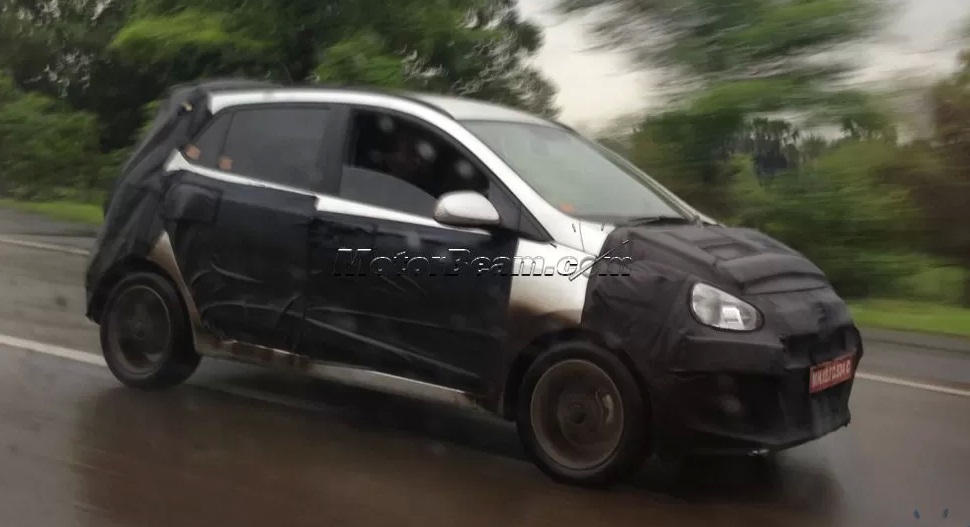 No one has seen how does the Next-Gen i10 look in real sans all those hidings and coverings it has been caught numerous times on the Indian soil. But there has bee a lot of information flow that has already happened.

Meanwhile, these latest spyshots courtesy MotorBeam.com share that Hyundai is continuing its test runs around Lonavala near Pune. As we have been iterating time and again that spyshots near Pune hint at an ARAI connect and the MH-12 test plates further accentuate our thoughts. Caught at the Mumbai-Pune Expressway, this might be the eagerly awaited 1.1L diesel mill which is expected to be the mainstay for the new car. It also hints at possible fuel efficiency tests which is one area where Hyundai will want to nail it considering the heated competition in and around the segment.

The 1.1L CRDI diesel motor will be Hyundai smallest in India and the Korean giant will leave no stone unturned to make it a grand success and hence, we can safely expect some mind-boggling fuel efficiency figures. Next-Gen Hyundai i10 might be called as ‘Brilliant’ and will be slightly bigger than the current i10 as can be made out from the spyshots. Instead of completely replacing the current i10, according to reports it will be sandwiched between the current i10 and i20 which means this would be a direct rival to Maruti Swift and others in this segment. Hyundai will officially unwrap the veils at the Frankfurt Auto Show and an Indian launch is expected sometime around September.