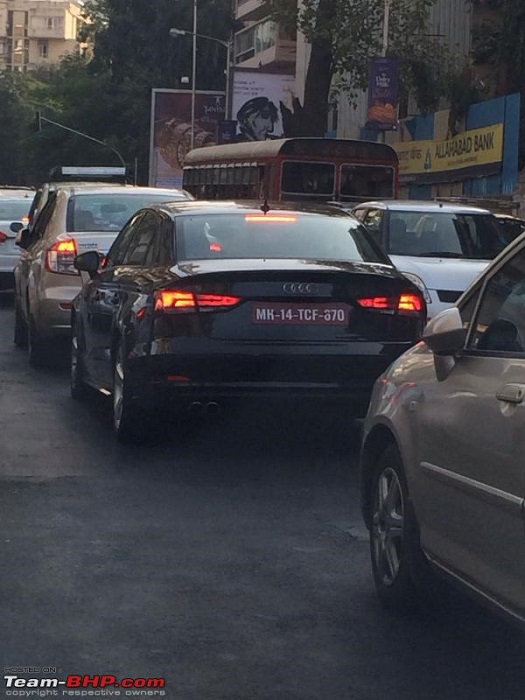 The Auto Expo 2014 unveiling candidate from Audi India, A3 sedan is being tested rigorously in and around the Mumbai region. We, now, have another spyshot coming from carfreak77, a Team-BHP.com member.

As has been the case with earlier shots, we yet again, have the rear of the car visible which was caught on Peddar Road.

A3, as the name suggests, is a smaller sedan than the A4 we have in India and will sit just under it. Audi, so far, has been trying to shield itself from the onslaught of various products in the sub 25 Lakh segment with an entry level variant of their Q3 SUV, dubbed as Q3 S and very recently, the cut-price A4 Celebration Edition which was launched at Rs 25.99 Lakh.

Priced at Rs 24.99 Lakh, Q3 S is Audi’s cheapest offering in India currently but Audi has plans to take the game further down with the A3 sedan. We expect A3 to be priced under the Q3 with an expected starting price tag of Rs 23 Lakhs. This will put the A3 right under the A-Class, B-Class from Mercedes and the 1-series from BMW.

Obviously, A3 being a sedan will help its cause, others being smaller hatchbacks and sports MPV. A3 is expected to be offered with 1.8L and 2.0L TFSI petrol engines and 2.0L TDI diesel engine.

Official showcase is expected at the upcoming Auto Expo and we expect Audi to launch it soon thereafter. At an entry price of sub 25 Lakhs, A3 appears to be just the right shot from the German manufacturer to create ripples in this segment.