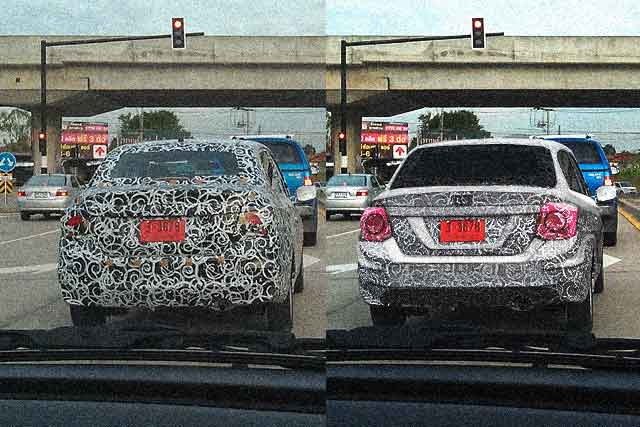 Barely a couple of days have passed when Honda released an official teaser of notchback version of Brio in Thailand, we have a couple of spyshots of the car under test.

This Brio sedan was caught testing in Thailand and are the first ever spy pics of this super-awaited car (in India at least). What makes it a more interesting wait for us Indians is the fact that this Brio sedan would be the first car in India which would carry a diesel mill from Honda.

The test mule in this pic does not reveal much in terms of anything new but does give us a clear hint of the body proportions. We do not have any pics of the front of the car yet which could reveal the changes Honda would incorporate on the new Brio sedan’s face.

Considering that Honda already has a proper C-segment sedan, City, we expect Brio notchback to sit under it and compete with Suzuki Dzire. This could also mean that Indian Brio notchback might be a sub 4-meter car to avail relaxed excise duties and qualify as a ‘small car’ in India.

In India we expect Brio notchback to make its presence somewhere around April 2013 and you can also look forward to Indian spy pics anytime soon. If you spot one, just send them across and earn some hot cash.

If you have not seen the official teaser, here is a small video clip.