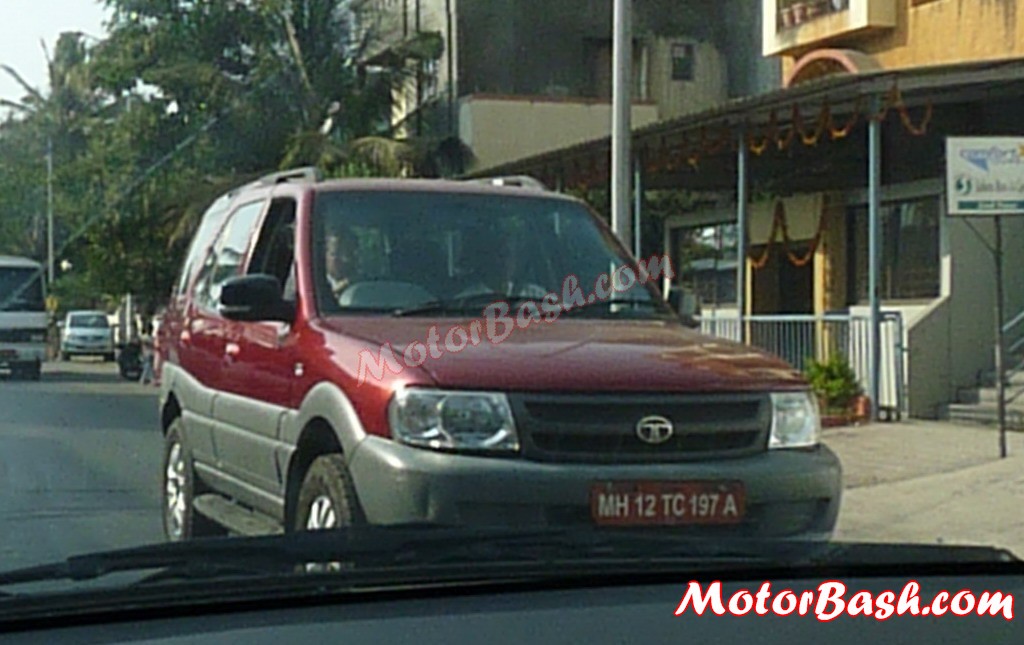 Currently, the only product that seems to be working for Tata is the latest launched Tata Safari Storme. However, interestingly, Tata has competitors within its own lineup to snatch Storme’s pie.

Few days back we have shared with you how the latest bumper discounts on Aria is cannibalizing into Safari Storme’s territory. And we can also not deny the contribution of Safari in denting Storme’s sales as it is still on sale. Aria’s involvement seems to be permanent (we assume!) since Tata is preparing a 2013 Aria facelift which will go on sale this year.

It is the Safari that Tata can really downgrade and create a good entry point for customers to latch on to Tata’s SUVs. Now, in an interesting shot, we have spotted a Tata Safari with red number plates which was heading towards Tata’s plant in Pune. This appears to be a potpourri of various variants of Safari.

It sports alloy wheels and ORVM integrated side blinkers, however there are no fog lamps or chrome at the front. So there is no clear giveaway of what this is. Is it a test mule at the first place is also not really confirmed?

But if it is, then there are high chances of Tata resurrecting its lineup and they might just be preparing a cheaper entry level Safari to sit a lot below and lure customers into buying ‘a Safari‘! This makes actual sense considering that a lot of people still regard Safari’s styling as one of the best yet!

Also Read: Tata Safari Storme is back on the roads, Testing!