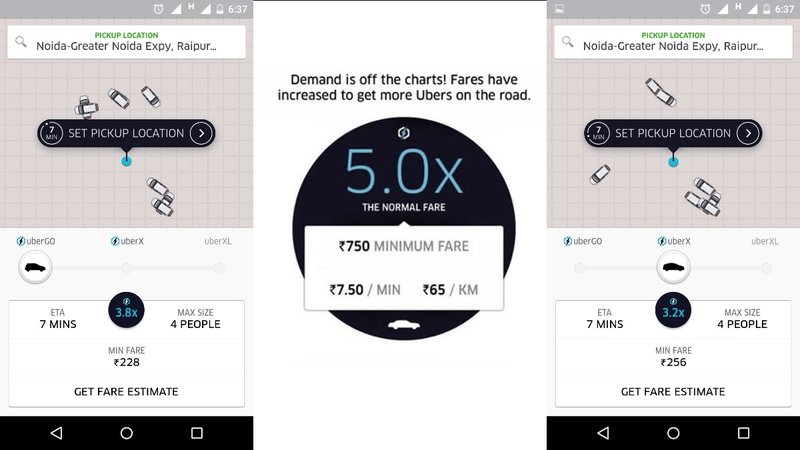 The Delhi Government has finally pulled the plug on surge pricing in app based taxi services like Ola and Uber. The transport department was asked by the AAP government to cancel permit and impound vehicles if they were found to be overcharging. Commuters had been complaining about extra high surge pricing right from Day 1 of phase 2 of odd-even.

This move has led services like Ola and Uber temporarily suspend their surge pricing to protect their drivers. The folks at Uber claim that during the last odd-even scheme in January, when surge pricing was not stopped, 92 per cent of rides in Delhi were without the higher pricing. Here’s what Mr Gagan Bhatia, GM, Uber North commented on the government’s latest move:

“Given the threat of the Delhi government to cancel permits and impound vehicles of our driver partners, we are temporarily suspending surge in Delhi with immediate effect. We hope to work with the government to keep Delhi moving especially during this time when the citizens need us the most.”

Citizens of NCR have been seriously troubled by surge pricing. Here’s what Ankit Berry, a resident of Mayur Vihar, Delhi had to say about it:

“I had to delay my travel  by 2 hours because of sky high surge pricing which even reached 5 times the normal fare. At the end I had to pay 600 bucks for a 14 kilometre ride. However, this latest move will definitely bring things under control.”

The folks at Ola too have removed surge in Delhi, which they call as peak pricing. Here’s what their Northern region head, Mr Deep Singh said:

“To make Govt’s Odd Even initiative a success, Ola has temporarily pulled out Peak Pricing in Delhi NCR. We have also rolled out an on-ground campaign where volunteers are spreading the message of ride-sharing and car-pooling in support of the scheme. Ola remains committed to a clean and green Delhi NCR while it enables sustainable transport solutions for the citizens in the region.”

What about you guys? Do you like this move or fear that demand will overpower the supply?