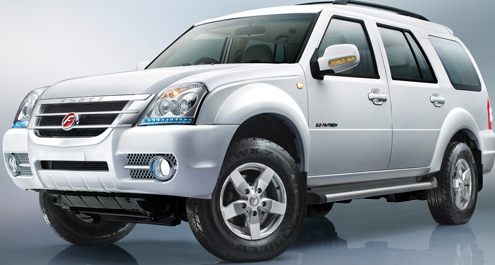 The frequency of spy shots we have published on Force One SUV from Pune is one of the highest among all we have shared so far.

At the end of the day, we were all confused about what is Force testing in their Force One SUV apart from the 4×4 and a possible ABS! This was made even more interesting when Mr Parsan Firodiya, MD of Force Motors, mentioned ‘various’ variants of Force One are underway while unveiling the Worlds Largest Monocoque 26 seater Traveller 26 bus.

And now, we have learnt that along with the 4X4 version (Exclusive & conclusive pictures here), Force is also working on a stripped down version of this SUV. The major intent, we see here is that Force wants to make the SUV available at a lower price band to make it a more luring buy.

Now what all would see a change is not known currently but what we foresee is a bare-bones version of this SUV competing with similar segment SUVs and the One gaining a bigger hand in terms of acres of space and utility.

And that is not all, through our exclusive clear pictures, we have revealed that Force is also working on a new 2013 Force Trax Gurkha.