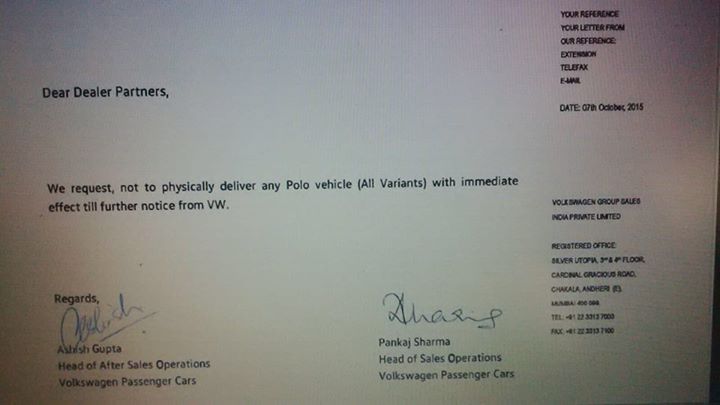 8th Oct 2015 Update: As expected, Volkswagen has issued an official statement on the halting of Polo’s sales. The company confirms that a particular batch of Polos from a specific production period are under evaluation because of a ‘technical reason’. They further say, that deliveries of the non-impacted Polo range continue normally. It must be noted that, according to the letter sent to the dealers (pictured below), Volkswagen has asked them to stop deliveries of ALL the variants of Polo immediately.

They have also not elaborated on what exactly is the issue but confirmed that it is not related to the EA 189 diesel software row. This leaves us virtually nowhere… there are a lot of issues coming up for which Volkswagen is not able to provide a reasonable resolution, at least for now…

7 Oct 2015: In what comes as a big surprise, Volkswagen has stopped dealers all across India from selling Polo to the customers with immediate effect. Economic Times has accessed a letter addressed to the dealers which has asked them not to “physically deliver” any Polo hatchback, all variants included, immediately till any further notice from the company. The letter has been signed by two top officials from Volkswagen.

This takes our attention to the massive Dieselgate scandal the company has been caught inm under which their cars were deployed with a cheat software which showed lesser emission levels than actual. However, surprisingly the report says that Indian halt of Polo sales doesn’t have anything to do with that. 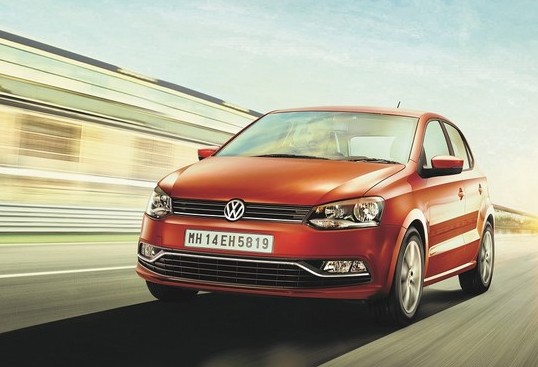 If not that, is there a big issue Volkswagen has unearthed, on their Polo hatchback which needed an immediate withdrawal from sales? Volkswagen officials say that there will be a detailed communication on this sometime today but we haven’t received any yet.

In this financial year, Volkswagen has till August, sold 13,827 Polos in the domestic market and 6052 units have been exported. Last month the company launched the new Polo with updated features. With this we await an official word from the company to understand what has caused this dramatic stoppage of sales of this cars which come into effect immediately!