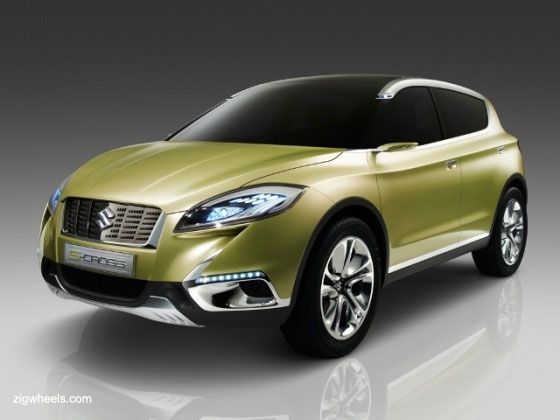 We recently shared with you the spyshots of the upcoming SX4 facelift from Gujarat and followed them up with the actual pics on how the facelifted SX4 is expected to look like. But that is just a stop gap arrangement that Maruti is upto. The real fun will begin sometime around late 2013-early 2014 because that is when a completely new SX4 is expected.

The sales of SX4 have been dipping every month and the surprise facelift shall act as a refreshment and to keep the product fresher for a little more time before this next-gen SX4 hits the center stage. Suzuki had unveiled an S-Cross concept back at Paris Motor Show and this will be the basis of the next SX4 sedan and the production version of the SX4 is expected to be heavily based on this S-Cross concept.

It shall replace the SX4 globally over a period of time and seeing how important the Indian market is, we expect India to be amongst the first wave of countries to get the next generation SX4.

It was back in 2007 Maruti brought the SX4 to India as an alternative to the Honda City but it never looked premium enough to put a dent on the sales of the City. SX4 currently sells around 500 units a month when the rivals sell somewhere around 2,500 units a month.

“We are looking for options to revive the SX4 sales. It is facing huge difficulty, as the market conditions are not conducive for bigger cars. We have been pushing the car aggressively and some changes would soon be incorporated to make it an attractive preposition for the local market” Maruti Suzuki MD S Nakanishi said.

The next gen SX4 is also expected to carry a few bits of the design philosophy of Swift when it would come to the headlights and tail lamps. Suzuki’s component suppliers have reported that the company is quite serious about giving the SX4 a major overhaul to compete with the fluidic design of the Verna and the elegance of the Vento.

We’ve always been appreciative of the car but the competition has never really let it strive despite the presence of a potent diesel engine. Now the S-Cross concept is quite a looker and if SX4 comes even near to it in terms of design, we might just have Maruti Suzuki dominating another car segment.