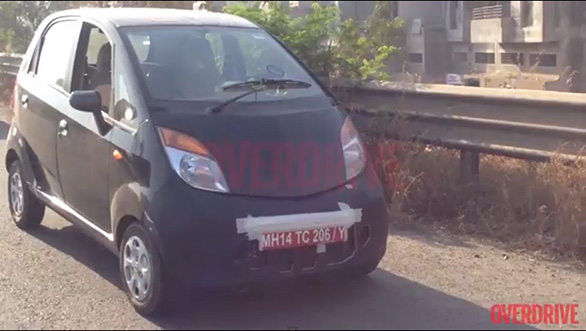 We have shared with all our readers tons of exclusive and conclusive spyshots of Tata Nano diesel, once with the mule emitting black smoke and the other time an open bonnet!

However, a recent report by Autocar India, which came as a real shocker claimed that Tata has shelved the project completely! Spyshots went dry and there was no update from Tata at the Auto Expo as well. However, in a latest, the car is back into action and Overdrive.in has snapped a mule somewhere in Pune along with a video of the car in motion.

They further claim that it will be launched sometime towards the end of this year or early next year. Even if this is true, this is too much of a delay from the time the first reports of Nano diesel started making waves many years back. The Nano diesel mule we see here is caught wearing larger and altered bumpers similar to the Nano Twist Active that Tata showcased at the Auto Expo.

Nano diesel will go with an 800cc two cylinder turbocharged motor with power output of around 40PS. Fuel efficiency will be its forte and according to our sources, the test mules on the roads were returning around 25kmpl on actual driving conditions.

Frankly speaking, it is really confusing at this moment to understand Tata’s plans on the Nano diesel. They are concentrating on improving the quality and user experience of their cars, hence there is a possibility that they do not want to risk an altogether a new diesel engine for a passenger mass market car, specially when the current sales of Nano are nothing to talk about.