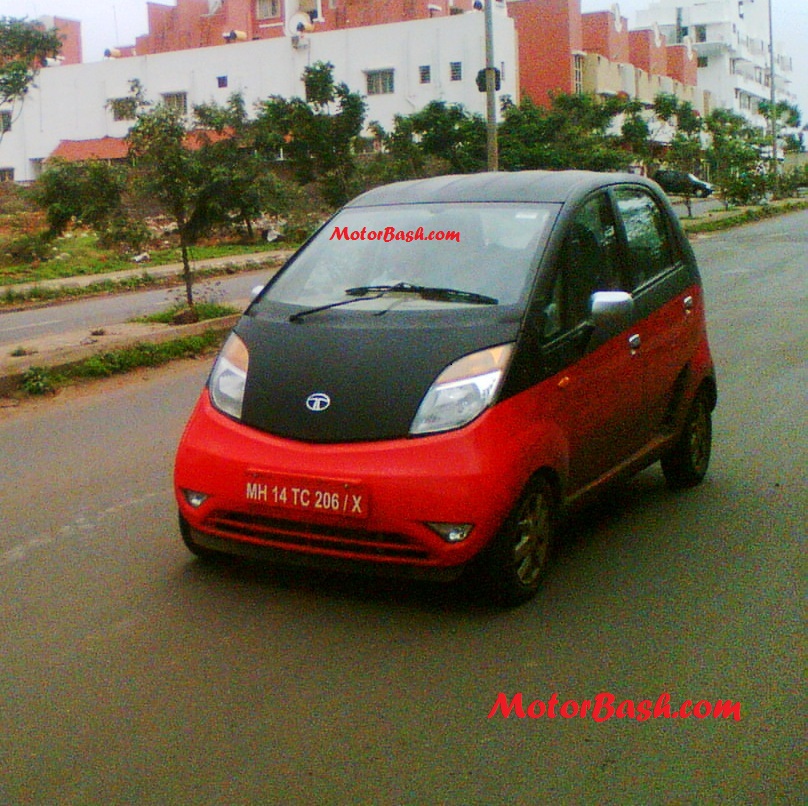 Besides a tough competition with it’s closest rival Mahindra & Mahindra, Tata Motors aims to sell 2 Lakhs Units of Nano this year. When a shareholder suggested that the company should put some more efforts to sell more Nanos, Mr. Ratan N. Tata, chairman of the company replied: “Yes, there is a need to increase the volumes…The year is not yet over, and I hope at least we can sell 2 lakh Nanos this year”.

Contrastingly, the company reported a 15 per cent rise in sales (at 74,159 units) in July; but that was mainly led by commercial vehicles. During that month, Tata Motors managed to sell 5,485 units of Nano, clocking a 68 per cent rise in over 3,260 units in July last year.

Nano has not really been able to live upto its expectations. But of late what we have seen is that Tata is really trying every bit on the Nano to make it sell. The picture you see below is one such example of a dual-tone Nano we caught testing in Pune.

Tata Motors is doing good in the overseas market and the company is all set to launch the Nano in Left Hand Drive markets. An LHD  Nano was exclusively scooped by us very recently.

The most important ace up Tata’s sleeve is the Diesel version of Nano. And from what Tata is currently targetting, there might be a little hint that Tata might advance its launch from next year. From Mr. Tata’s words, a diesel version of Nano is highly anticipated sooner than ever; as he said: “Diesel is going to really become the engine of the future, so everyone is working on diesel”.

Tata Motors is also working on a CNG variant of the Nano which would be the earliest Nano variant which would hit our shores in all probability by Diwali. Though we are not sure about this, but Tata might also launch this Dual Tone Nano (featured above) around Diwali as some kind of a special edition.