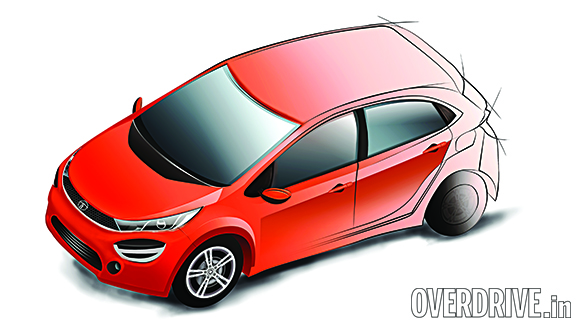 Ever since the arrival of the Zest and Bolt, Tata seems to be in an adrenaline driven mode. After the Tiago, Hexa, Kite 5 and compact SUV Nexon, the Pune based automaker will be bringing not less than 6 new cars! In fact a report in Overdrive adds that these new cars will be launched in a span of three years lying between the years 2017 and 2020. One of the most exciting product in the list is going to be a premium hatchback X451.

Rivalling the leagues of Hyundai Elite i20, Maruti Baleno and Honda Jazz, this new hatch will be built on an all-new underpinning called as Advanced Modular Platform (AMP). Look Ma, no Indica here! Powering this will be new four cylinder petrol and diesel mills. The report claims that in terms of exterior designing, the X451 will be inspired from the Nexon. With similar thin projector head lamps, low set fog lamps and a third layer of lights in the middle (possibly DRLs and indicators), the car can be quite a looker.

Interiors will include some premium features usually seen in the segment. Also on cards is a premium mid-sized sedan, based on the X451, rivalling the City and Ciaz. This will give the  engineers more leverage to lend Tata a new brand image as a maker of premium quality products which do not sound like an Indica taxi! Two more products codenamed Q501 and Q502 are SUVs which we have talked about earlier. With help being taken in from Jaguar Land Rover, these new SUVs will be their flagship offerings placed over the Hexa and Safari.

MPVs? While many players are shying away from this segment, the folks at Tata are reportedly working on two new MPVs codenamed X601 and X602. With a more SUVish flavour, these will be replacements of the Sumo and the Movus. The report adds that both of them will look pretty much the same, except for a few designing alterations and seating arrangement. Powering them will be a new 2.0 litre diesel mill.

So ready for a new age Tata?