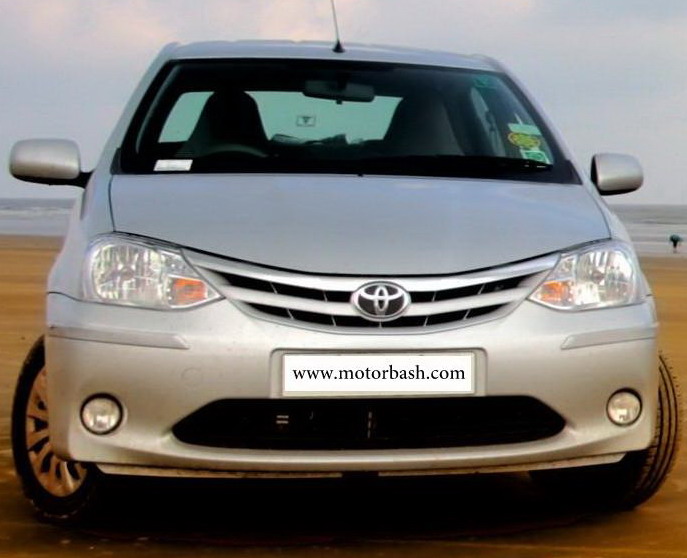 Well, as they say, ‘Q Class’ to describe the Etios, we’ll look into the matter and find out why. You can click on pics to open high resolution images. 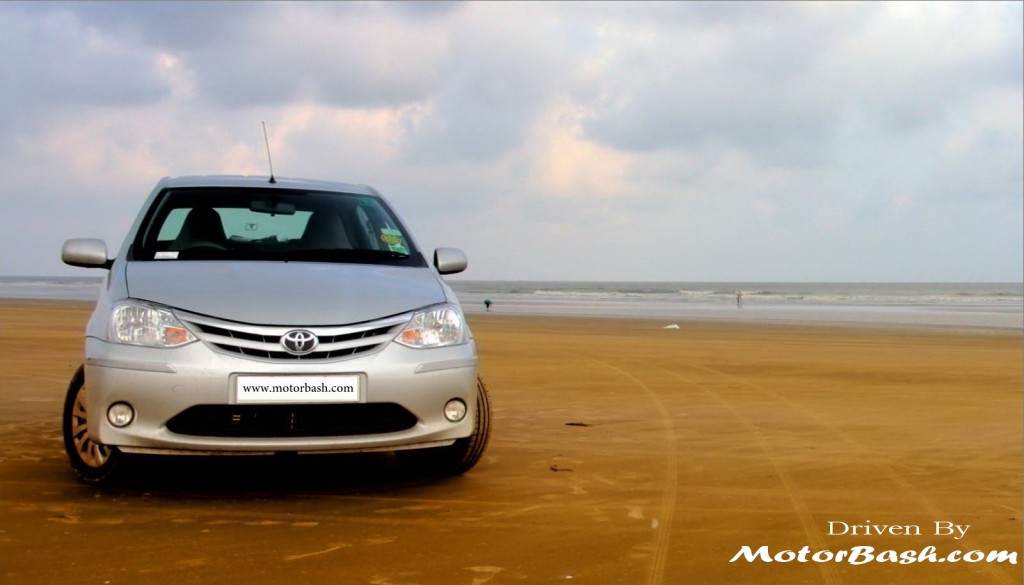 Toyota India thought of getting to the masses, so they decided to get into the Indian car market with cheaper cars and hence was launched the Toyota Etios sedan followed by the Etios Liva, the hatchback based on the same platform. The Etios is priced from approximately 5.12 Lakhs ex-showroom for the base model & 7.12 Lakhs for the top model. Toyota launched the Etios on 2nd Dec 2010 and got a great response in a short time, so their initial plans were successful. But the big question is: will their plan succeed in the long run too? Let’s find out and see how our test car, a Toyota Etios G Petrol performed for the last Nine months clocking around 10,000 Kilometers on the odometer.

From outside, Etios is neither an eye candy nor an eye sore; it’s a decent looking sedan. It has got those plain vanilla looks which can best be considered as half a decade dated design. There are not too many curves on the body; it’s kept plain and simple. On the roads, it’s no head-turner and doesn’t garner much road attention. The metal sheet is thin and lacks the strong feel of the European cars. 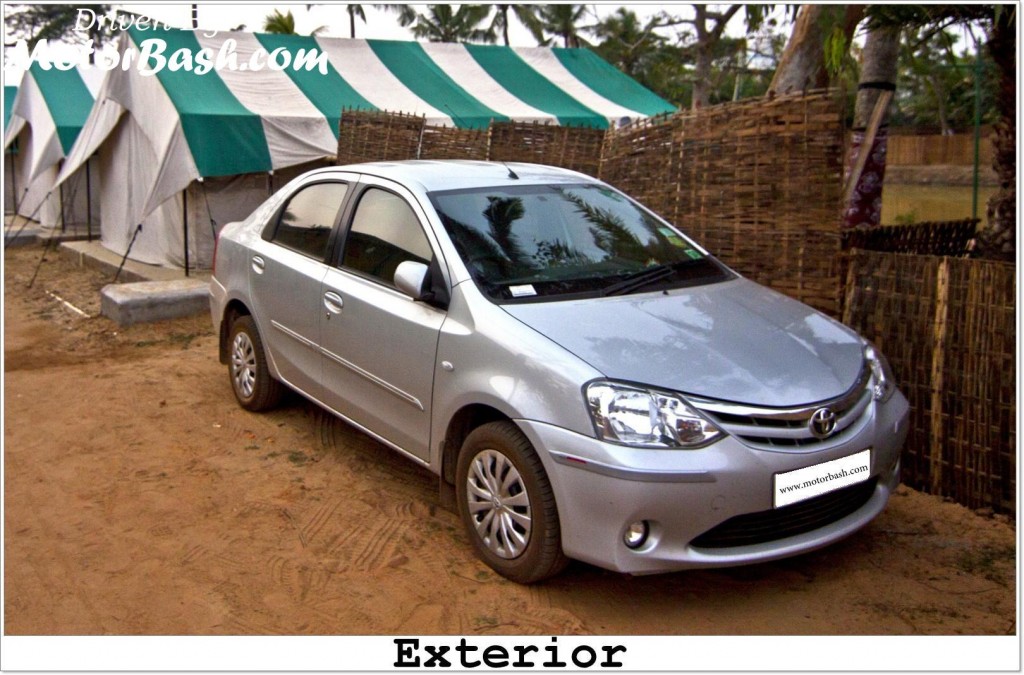 Now let’s get in! Open the door and you’ll feel it light. Close the door and it’ll sound like a typical Japanese car; you won’t get that European solid thud. The dashboard plastics look cheap but quality wise it’s hard and long lasting. We can vouch on our previous statement as our test vehicle has done 10,000 kms in both good and bad roads but there is no rattling sound or any kind of related issues. 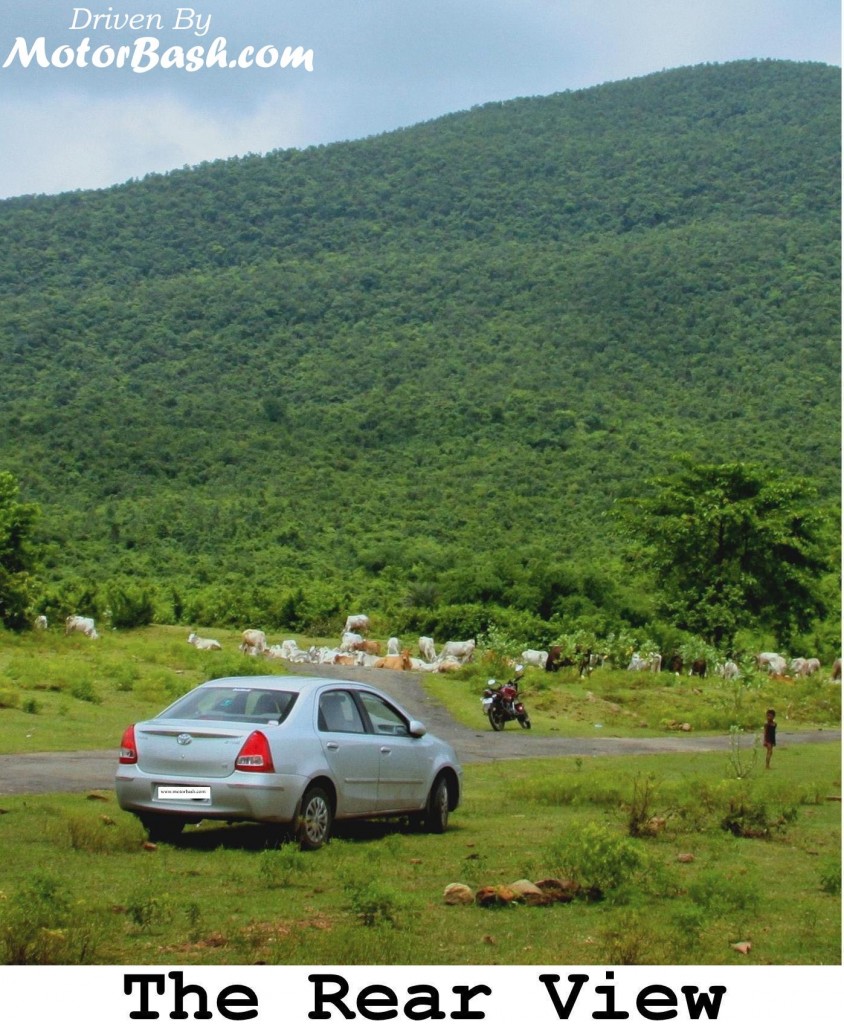 The centrally mounted console is not to everyones liking. It looks good to few people and bad to few. At night with the dashboard light on, it looks far better than what it looks in daytime. In ‘J’ and ‘G’ variant, Tachometer is missing. It’s only available in ‘V’ and ‘VX’ trims.

The company fitted music system provides decent sound. Toyota provides two speakers on the front doors & two twitters on the dashboard; rear speakers are missing. So if you prefer rear seat riding, we would suggest you to fit it as an aftermarket fitment. There has been a provision provided for that in the rear parcel tray. Again, the company fitted music system is only available in the ‘V’ and ‘VX’ variant. Aux and USB supports are provided as a stock fitment from Toyota which is a big relief for music lovers! The steering wheel is small and nice to grab. The Travel of the Tilt Adjustable Steering is practically useless as it hardly travels 2-3 inches! 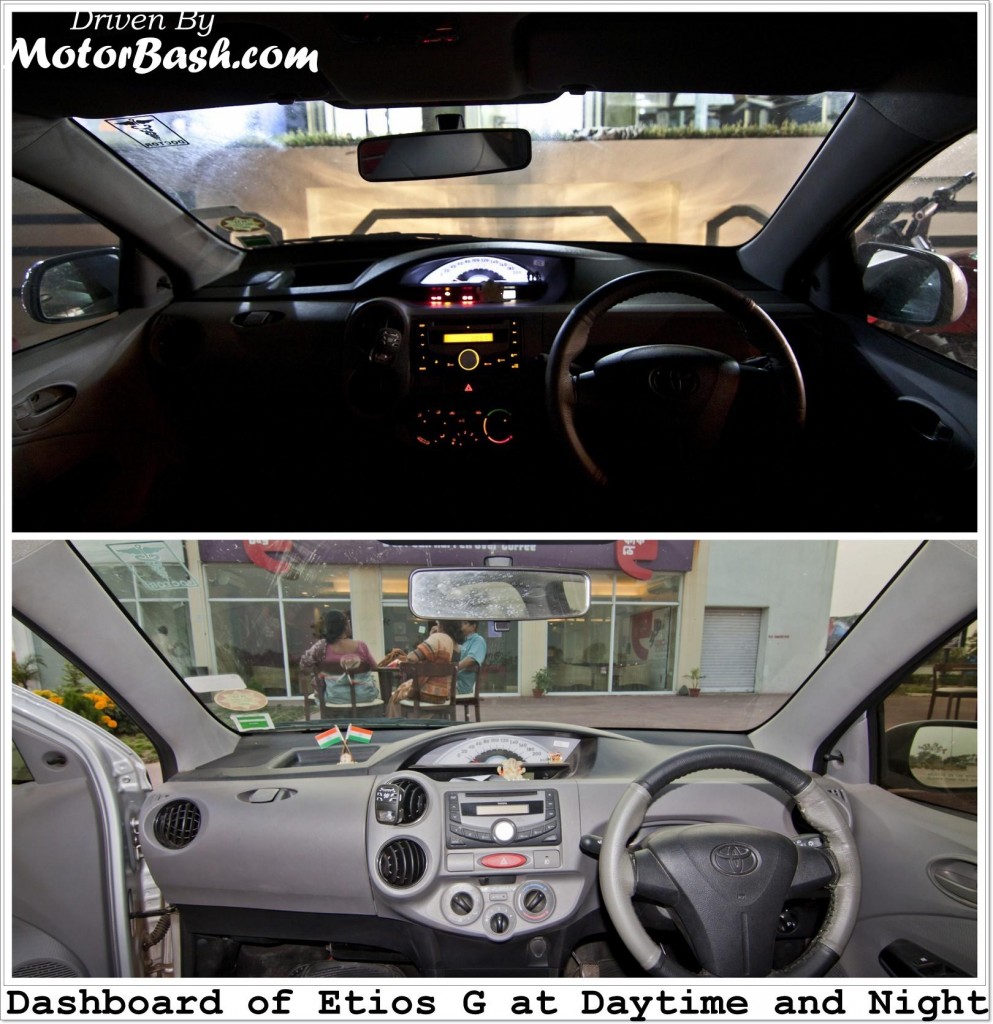 The Air-conditioning is decent. First when you switch on the AC in excessive Indian summer, it will take a couple of minutes to cool down. Once the cabin is cooled, you can keep the knob at 2 -3 mark according to the temperature you need. Till now we didn’t have to continue the AC in full for more than 30 minutes.

Now let’s come to the seats. They look thin but are comfortable and give good support in long drives. The rear seats are really spacious with good amount of leg space. 3 persons can accommodate comfortably on the rear seats. The inclinations of the seats are just perfect. The head room is also good. So if your driver misses a road hump, even a 6 feet tall person won’t have to worry for bumping his head onto the roof! There are no adjustable head rests with any of the seats unlike lower segment cars like even a Maruti Alto K10 or a Hyundai i10. 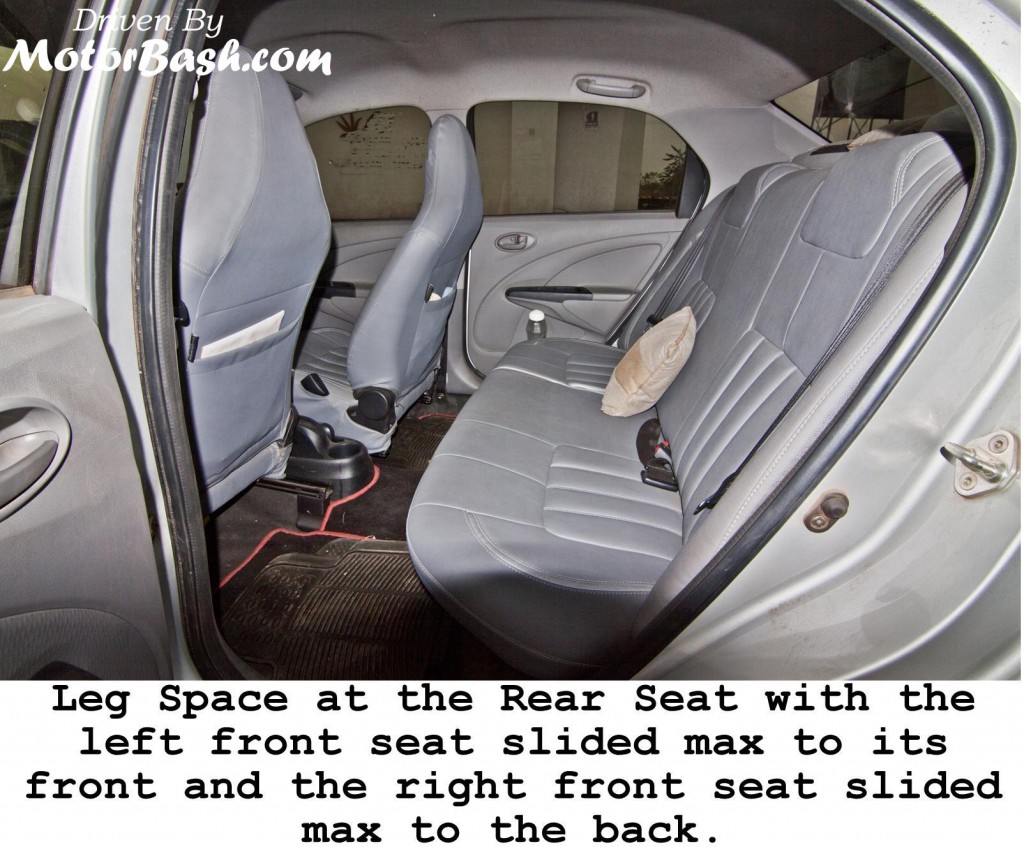 Now if we consider the overall feel of the interior in one word, it’s practical. It has got a large cooled glove box, few bottle holders and lots of space to carry your luggage. The 595 liter boot space is really huge and it can swallow a lot of luggage for your long weekend trips. 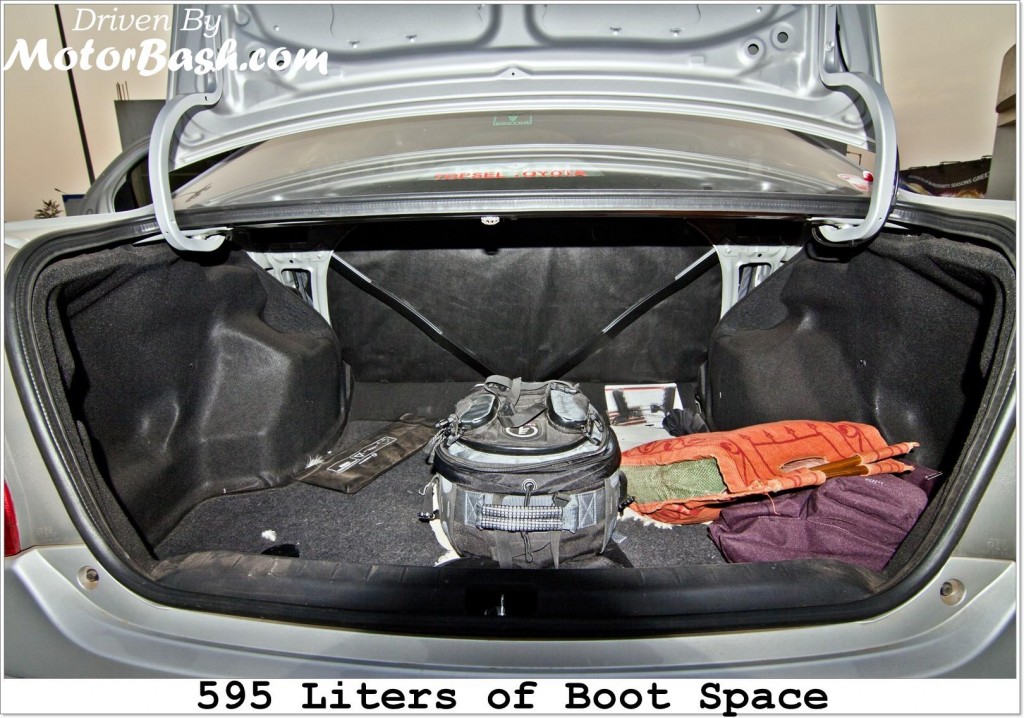 The point where the Etios interior lacks is it doesn’t have that posh feel. Few screws are not properly hidden & cost cutting is evident. It looks like an interior of a 3 Lakh car. Toyota even didn’t bother to give rubber gaskets on the door which results in dust and mud accumulation within the door panel gaps. 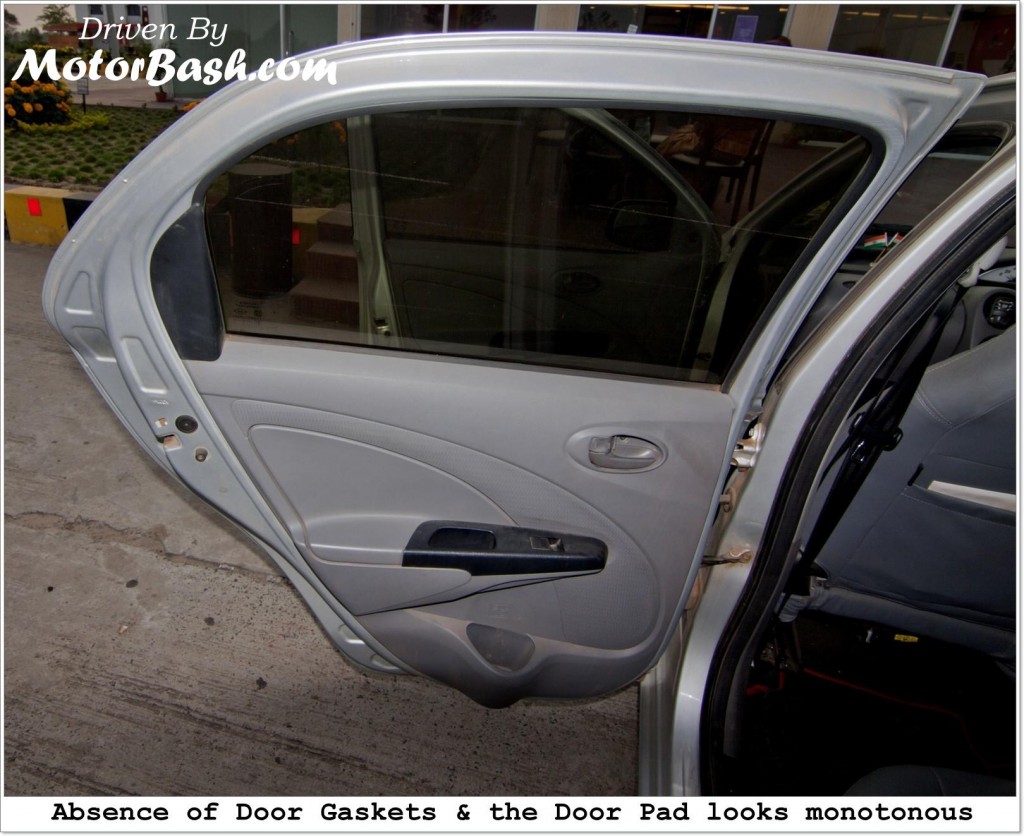 But as we have read about water leakage and insects getting inside the cabin in few cases, we can assure you that there are no such issues. We tested our car vigorously on that aspect and not a single drop of water goes inside the cabin. But due to cost cutting road noise is evident when the car is above 3.5k rpm.

This is the strongest part of the car – the 1.5 Liter Petrol Engine produces 90PS of max power with 132Nm torque to play with. The best part is that this car weighs only 960kg which is even lighter than few hatchbacks. With a power to weight ratio of 99 BHP per Tonne (which is even more than Ford fiesta Classic 1.6 petrol), this car is definitely one of the most agile in the segment. Crank the engine and you’ll find it roar with a fair amount of noise. But once the engine is ON, it’s silent with very negligible vibrations.

Engage the first gear and you will feel it’s really precise and smooth. Press the accelerator pedal and leave the light clutch, the car will be in motion. Press the accelerator and it will never disappoint you. As if the car is waiting for you to push it further. Its capable of doing a 0-100 kmph in 11.4 seconds and Toyota claims a top speed of 178km/hr, though we have taken it till 170km/hr, it still had few juice left in it but the road condition didn’t permit us to test it any further (Safety first!).

When you are driving on the highways to overtake big trucks or other vehicles you will never feel the lack of power & there is absolutely no need to down shift. While in city, the 132NM torque is really useful which enables you to even crawl at speeds like 20km/hr in 3rd gear. While crossing a speed breaker, you don’t really need to engage first gear; it will easily pull from 2nd. So in one word, the drivability of this car in city and highway both are awesome. The only negative point about the engine we’d say is it becomes a bit buzzy post 3.5k rpm. But that means you are already doing around speeds like 140km/hr! So it can be ignored or may be not when you get a real open highway! 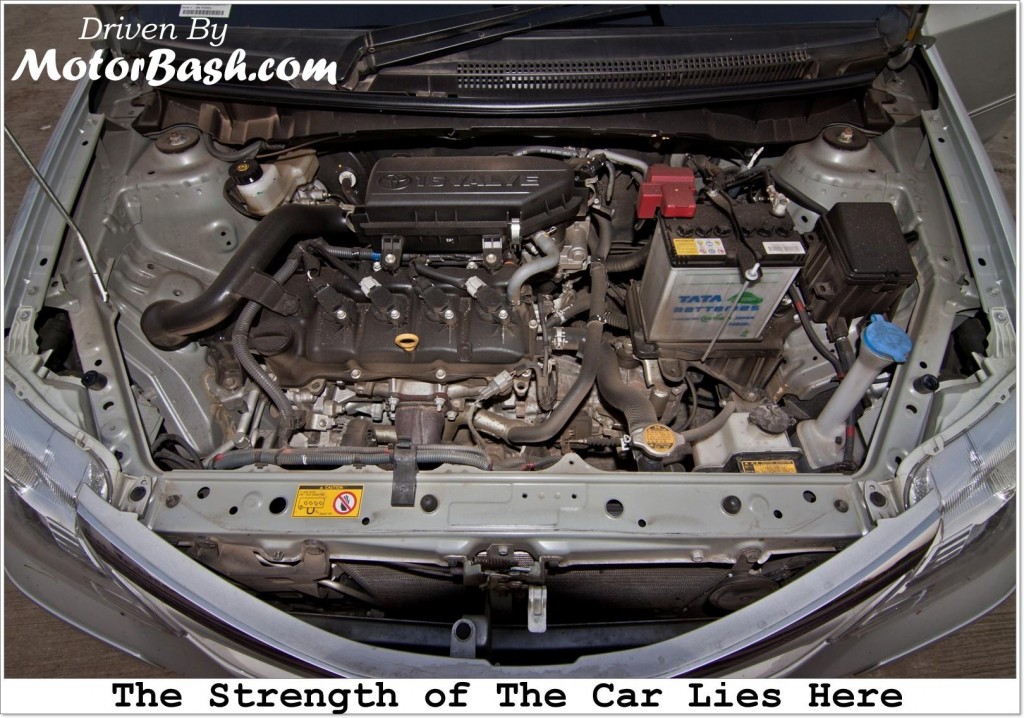 Now let’s check if the brakes are at par with its performance. So the answer is definitely a ‘yes’. The Toyota Etios do have very sharp braking. In case of panic braking in short distances, you can rely on the brakes. The ‘V’ and ‘VX’ version is equipped with ABS where as the other two models do not have ABS; but the brakes for all the models perform really well.

Step inside the car and adjust the steering and seat according to your comfort and you will find yourself in a comfortable driving position within few minutes. The ergonomics of the car is really good which will help you to get accustomed with the car within few minutes. The small steering wheel is really nice to grab. We were a bit skeptical about its handling part as the car only weights a mere 960kg! But the handling of the car really surprised us as it handles really well though it’s no Ford Fiesta!

On the highways, the car feels solid till speeds like 120kmph. Cross winds don’t affect the car much. Once you cross 120kmph and you are doing speeds around 140kmph you need to be careful as at that time the light weight of the cars comes on to the picture. If the roads are twisty, it’s better to take your foot off the accelerator pedal at very high speeds.

In city, handling is nice and easy. Body roll is present in bad roads or high speed cornering, but it’s there by an acceptable range. The ride quality is good though the suspension is on the stiffer side. So at lower speeds you may feel a bit of bumpiness on the rear seats; but once the car is at good speed, the ride is smooth poised and comfortable.
Toyota provided a single wiper but its range is better than many cars having two wipers. It serves the purpose very well.

The head lights do a decent job at night. Their seal beam is good. So if you need more powerful light, just upgrading the bulb to a more powerful halogen or to a HID would be fine. The fog lamps are present only in ‘V’ & ‘VX’ variants, though they’re not that useful at night. On highways, when you are using the high beam, you can put the fog lamps on for just for an extra bit of light. The company fitted horns are inadequate for highways; you need to upgrade them to a louder one for your own safety!

It’s one of those most important factors that most people consider before buying a car. So rather than writing much on this, let the figures do the talking.
Figures that we achieved are like the followings:

One tip from our side to extract better mileage from Etios: As the car has got 132nm of torque, shift early. You don’t have to take the car to more speeds to shift to the next gear.

Toyota does have a winner in their hands, but with a few niggles. To get 100% satisfaction from the owner, Toyota really needs to fix up few issues. First of all, an owner who is not a driving enthusiast may cancel the car from the first look as he/she might not be impressed by the interiors and the exterior as well. If you pay 6-7 lacks for a car, you will definitely expect a posh interior. Toyota should at least provide interiors like the new Maruti Swift Dezire or the Nissan Sunny or the Hyundai i20!

Ways of Cost Cutting, like not giving door gaskets are absolutely not acceptable. We expect Toyota to fix up these minor issues ASAP.

Apart from these, this car is really worth owning. If you are a driving enthusiast and love driving, you can just close your eyes and opt for the Toyota Etios. If you are a family person who needs a proper sedan with decent ride quality, good service back up and good resale value along with the brand name ‘Toyota’, this car is for you. But if you want a car with awesome looks and superb interiors, you have to look out elsewhere. To sum it up, Toyota Etios is a value for money and a practical sedan with a hassle free ownership experience. Our test vehicle has done around 10,000 kms in 9 months and there were absolutely no issues with the car. 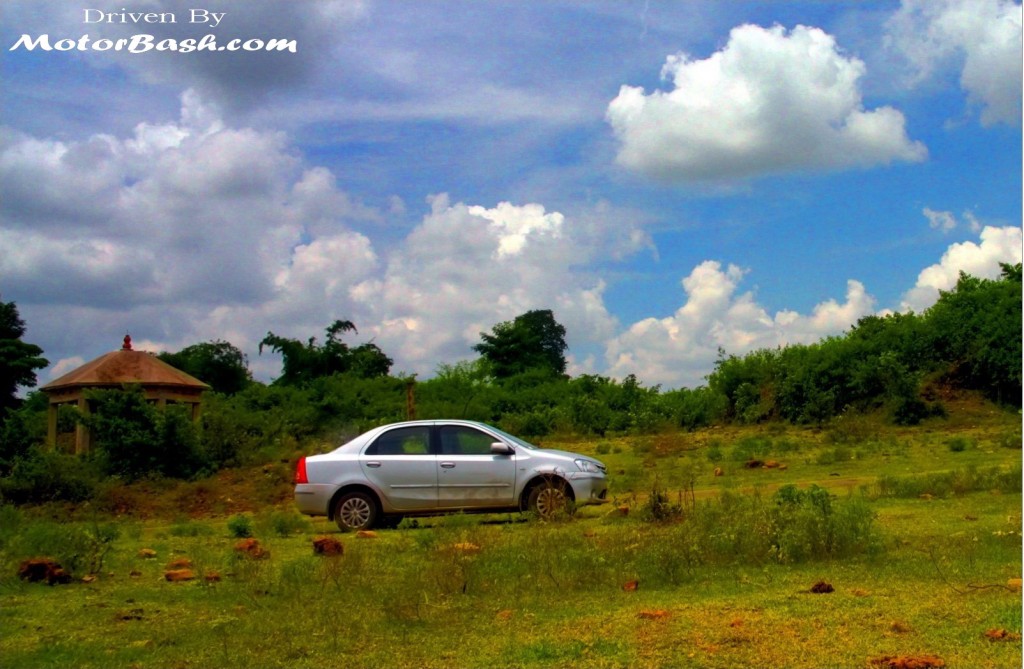 So the question is: are we satisfied with the car or will Toyota be able to put up its sales chart on the higher side?

The answer is a Yes; we are indeed satisfied with the car. Overall we would give 8.5 points out of 10 to this car.
Now if Toyota fixes out those few issues then this car can definitely become among the best sellers of the segment in the market for the next coming years.

P.S. A bit of clarification for our readers: The Music System, Front Fog Lights and Seat Covers that you see in the photographs, are aftermarket fitments. Those equipments in the pictures aren’t standard fitments of the Etios G Petrol.

Special thanks to Samba Sengupta (sambasengupta@gmail.com) for his valuable inputs and exclusive photographs.