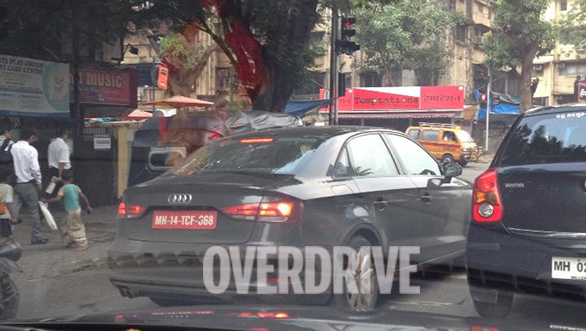 Regulars at Motorbash will be quite familiar with Audi’s entry level sedan –A3. The luxury sedan has come in pixels once again doing rounds in Mumbai. Courtesy Overdrive.in we have a shot of the rear three quarter profile of the beautiful sedan.

Sedan in the spy shot shows the rear stance typical of Audi family and the A4 inspired tail lights. The A3 uses regular taillights assembly instead of the LED units available in A4. It is a tad smaller in length compared to the elder A4 too.

A3 sedan will be the second offering in India next to Skoda Octavia based on the shared MQB platform of Volkswagen family. Platform sharing will translate to lower pricing of the sedan through high levels of localization and parts sharing.

Feature stripping and cost cutting will end here, on the inside A3 will be a proper Audi with expected Audi’s Drive Select module, the MMI system, a sunroof, two zone climate controls, electrically adjustable seats and a multifunctional steering. The sedan will ride and handle true to Audi’s DNA.

The small luxury sedan based on hatchbacks has seen good reception in US and China. The story is unlikely to change in the Sedan crazy India. The Sedan is likely break covers at the Delhi Auto expo’14 at a desirable price range of 20-25lakh INR.

In India, the Audi A3 could be the least priced model in the German luxury car maker’s line up. A3 will go against the likes of the Mercedes Benz CLA sedan (also launching in 2014), A-Class itself and BMW 1-Series hatchback.

Also Read: Upcoming Audi Q1 to be Based on The Next-Gen VW Polo; Interested..?