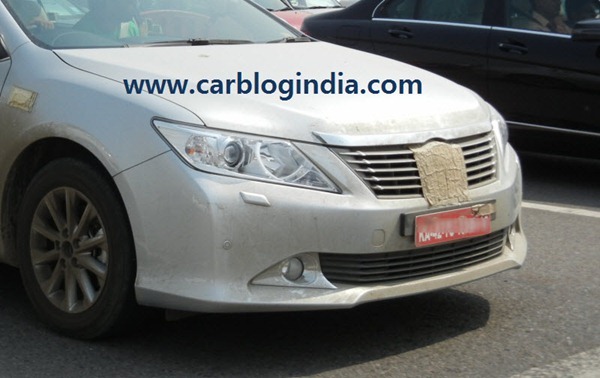 A few days back we shared with you the news that Toyota would be localising the assembly of New Camry and we have also published a scoop of Camry earlier which was caught in Bangalore . Here we go with another one which reveals that the car is being worked upon and is in the process of becoming production ready.

Carblog India has published a new and clear set of images of the New Camry which they caught on the way between Delhi and Gurgaon. The car does look impending and and fresher in its new avatar. We repeat again, this car looks a little Accord like and is a lot more flatter than the current Camry.

The good news however, is that Toyota would be assembling the new Camry at its Bangalore plant and this is a giveaway to a very possible ‘competitive’ price tag! We do not have a hint as yet about the engines that would make way into the Indian Camry. The new Camry is expected to be launched somewhere around August this year but as we expect, it would only be the petrol variant which is expected soon; diesel might come later.

We have also published a Toyota Camry Gallery and our Indian version would also be similar to this.