Maruti Suzuki India Limited (MSIL) has already lost $550 Million in last year, thanks to labour unrest. MSIL spokesperson Mr. Puneet Dhawan said: protesting workers at the Manesar plant attacked senior officials and set the plant on fire. At least 90 officials were injured and were sent to hospital. “The Police have taken charge of the premises”, Mr. Dhawan said, “One body was recovered from the premises, it is charred beyond recognition”. 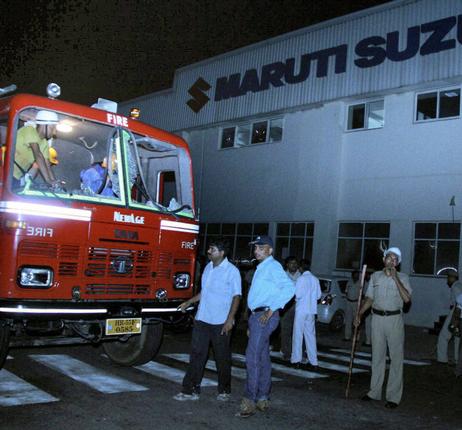 Now, that charred body was identified as Mr. Awanish Kumar Dev, GM (HR) at the plant. This violation was triggered by a scuffle over suspension of an employee after a heated exchange of words. 91 employees have been arrested by Police so far. These people were produced before a local magistrate who remanded them to 14 days judicial custody. They have been accused of various charges including rioting with weapons, murder, attempt to murder, unlawful assembly, assault and trespass.

Talking about possible damages, the company said: “We are still assessing the total damage to property and facilities from the acts of arson. What is clear is that the office facilities have been burnt beyond repair, as have the main gate, security office and the fire safety section”.

Initially MSIL said that the Manesar plant will remain closed on Thursday. Later, MSIL said in a statement that the plant have been shut and no production will take place. “We will shortly announce our decision on the next steps with regard to resuming operations in these facilities”, the company also added. The Manesar plant of MSIL produces cars like Swift, Dzire, SX4 and A-Star. So, as an obvious effect, supply of these cars will be affected, followed by a prolonged waiting period.