The Volkswagen Passat is set for an update later this year and the good folks have released initial sketches of the executive sedan to give us an idea as to how the car would look. Although the Chinese model (where it is known as the Magotan) has already been spied, we can still expect the European spec Passat to be slightly longer. India will most probably get the European model.

The new Passat appears to be much sleeker than the present generation and more streamlined. The flared wheel arches add to the bold looks of the car. The headlamp unit seems impressive and will surely go down well with the overall looks of the car. The bonnet carries the same lines as that of the present generation. The front bumper though seems way more aggressive than a Passat has ever been. The rear tail lamps follow the example set by the front unit and gels well with the coupe like slanting roofline.

The twin exhausts which have been diffused with the rear bumper add sportiness and will most probably have a chrome strip around it. The front radiator grille is also expected to get a chrome strip as well. A bulge below the shoulder line shall break the monotonousness of the huge doors, adding more muscles to the side profile. 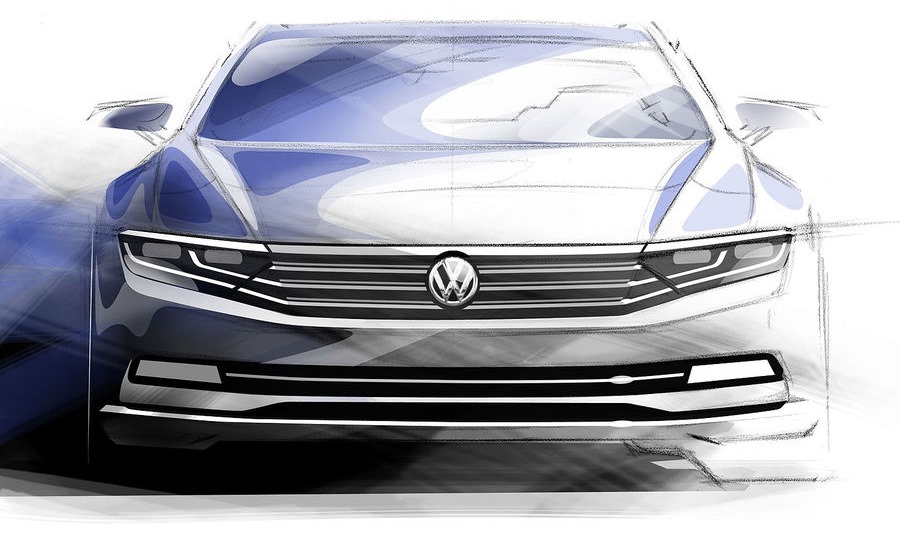 The designers though did not reveal any interior sketches but if the Chinese version is anything to go by, we can expect changes to the infotainment unit. The new Passat is based on the MQB platform.

According to Autocar, the car is also scheduled to get a new heart in the form of a 2.0L four cylinder, twin turbo diesel which will churn out 240PS of maximum power and 500Nm of peak torque, mated with the 7 speed DSG auto transmission. It is also supposed to have engine options in the range of 119PS to 280PS.

The new Volkswagen Passat will also get a plug-in hybrid variant with a 1.4L petrol engine combined with a 101PS electric motor, but this would not be launched before 2015. The car is expected to have a range of 50km on the electric mill only.