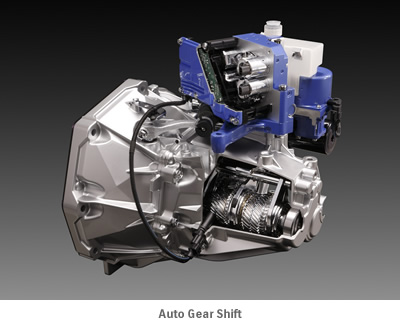 Off late, you must be reading a lot about this relatively new term called as ‘AMT’ in India. If you are confused what is it exactly and how does it work and what are its characteristics, just continue reading.

Developed by Suzuki, the new Auto Gear shift promoted as ‘EZ Drive’ by the company in India, will be the next big thing in the market. It is a relatively easier transmission than the complete autobox and is also cheaper to produce. It full forms to Automated Manual Transmission.

How does Suzuki’s AMT Work?

It is essentially a 5-speed manual transmission which has an electro-hydraulic actuator which takes care of both the clutch and gearshift and operates both of them automatically. The actuator and the controller are directly mounted on the transmission and this provides unity of the operating device in turn helping smooth shifts by creating synchronization between engine rpm, clutch and gearshits.

According to the claims by Suzuki, the new Auto Gear Shift helps in achieving better fuel efficiency than an equivalent automatic gearbox since the basis of AMT is manual transmission. We have seen in the case of Celerio that the ARAI certified fuel efficiency for both the 5-speed Manual transmission as well as the AMT stand at a very impressive 23.1kmpl.

And since there is no clutch pedal for the driver to operate, you are saved of that extra efforts which helps in the ease of driving specially in congested city traffic commutes. AMT box also helps save costs and is cheaper to make than an Autobox. Add to that, your AMT equipped car always has the option of switching to the Manual Mode which let’s you enjoy the driving as you want, just like a regular manual transmission car.

Celerio will be the first stock car that will come equipped with such a transmission in India, however, we have people who have been getting their car transmissions fitted with this kind of an Automated Manual Transmission as an aftermarket fitment.

Apart from Maruti Celerio, Tata is also considering launching their Nano with an AMT gearbox to further enhance the ‘smartness’ of the car. We have not driven such a car and hope it brings about a nice little change in the Automatic cars in the country, most important being – making them cheaper!