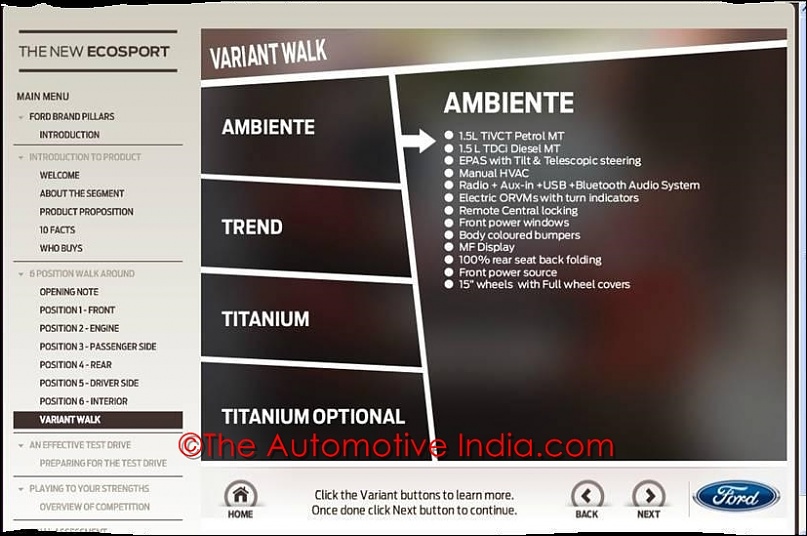 Update: Its confirmed that Ford will name EcoSport Variants with the following terms and 1.5L petrol will actually come in the manual as well as Auto. More Details here

Ford, during the first unveiling of EcoSport in March, revealed the official details of the compact SUV. Apart from the 3 engines, automatic and manual gearboxes, it also said that EcoSport will come in 4 trims.

And here we have a claimed list of 4 variants of EcoSport for India shared by carageous, The Automotive India forum member.

First up, the same combination of 3 engines that Ford will offer for India. And a top of the line Titanium Optional or Titanium+ variant will be present over Titanium.

Titanium+ in India will also get Keyless Entry and Push start button along with side airbags as Ford already features this on their official Indian website.

Check Out the First Look of Ford EcoSport With 44 Pics

It is still a big question on how will Ford place all the engine options along with variants correctly in India. There are all the chances of Ford launching EcoSport at a really fantastic price tag and as we understand that will have to be for a petrol motor. The company has already cleared that the 1.5L petrol motor will only come with the Automatic Transmission (anyways, it goes over the 12% excise duty, so they can not price it real competitively) and hence, it should be the EcoBoost that shall get this duty!

Meanwhile, Ford is conducting a global media drive of EcoSport in a few days from now in Goa. Keep tuned for all the details.