Ever since Mahindra launched their XUV500 crossover in India, there has been no real competition in terms of product category, albeit it was compared with Tata’s Aria which is more of a comfortable MPV, but a failed product.

Tata, after delaying it for 5-6 years, launched the all-new Safari called as Storme. We loved the name, we liked the silhouette and Tata promised a lot of capability.

Safari Storme slugs it out with the higher C-segment SUVs whereas XUV500 is a proper D-segment crossover. After Mahindra launched the entry level W4 variant of XUV500, it has ventured into the Safari Storme territory and ever since then we have seen a lot of people getting confused on getting ‘which one’?

So, let us today, list the spec & feature differences between two comparable variants of these SUVs – XUV500’s entry W4 against the mid-level EX of Safari Storme.

*Older XUVs had a 200mm ground clearance. To dodge the new pathetic ruling of extra tax on SUVs over 170mm in clearance, Mahindra has installed a stone guard to bring the official ground clearance under that 170mm and now they do not publicize it anywhere!

The biggest difference between these two crossovers/SUVs is that Safari Storme is built on a body on ladder frame chassis whereas XUV500 is monocoque. It does mean that XUV is more advanced in terms of its chassis but Safari Storme will be better and more capable at off-roads.

Interestingly, both the SUVs have exactly the same sized (2179cc) engine! Talking about feature offerings, XUV500 is a better packaged product without doubt. It has a slightly more torquey engine and comes with an extra 6th gear for effortless cruising. Despite being smaller in all dimensions, it has a longer wheelbase but the biggest point of concern for Storme is its heavy kerb weight of 2000kgs! In comparison, XUV500 W4 is considerably 215kgs lighter. 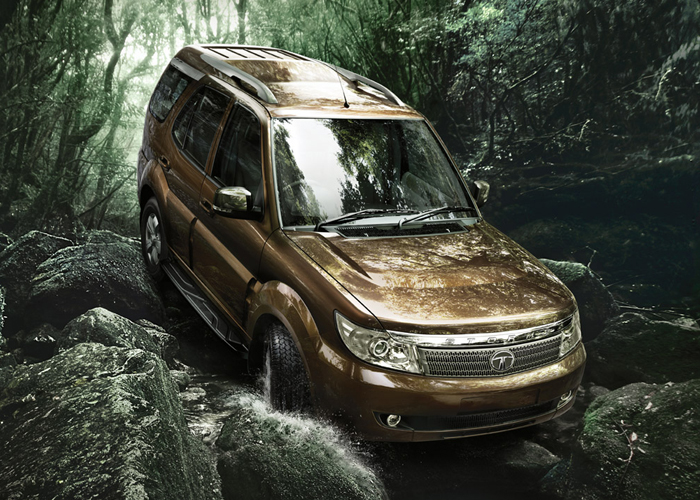 This heavier weight plays a significant role in slowing down the 2 tonne mammoth, also reducing its rated fuel efficiency figures. Tata has not mentioned any official performance figures, but Mahindra does boost about its response 2.2L mHawak motor. Here is what they claim:

Apart from smaller feature differences, the biggest difference is the presence of front two airbags on the XUV W4 for both the driver and side passenger. Storme EX, despite being the second variant in the lineup doesn’t get any!

Add to this, the almost Rs 20,000 lesser asking price for the W4. So, unless you are mostly into rough roads, the XUV500 W4 makes a terrific value preposition specially with those front two airbags!

Related: Clash of the Compacts: Ford EcoSport Versus Renault Duster: Which ONE..?