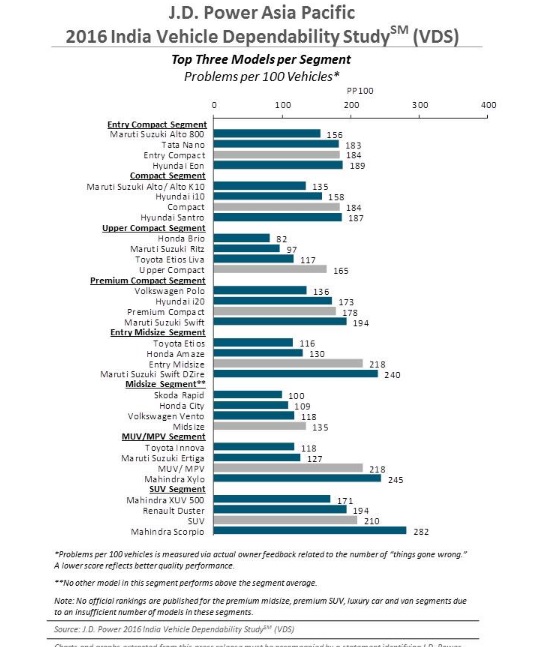 The car market in India is slowing maturing. Gone are the days when car makers could get away with shoddy build quality. In fact, as per the recently released JD Power 2016 India Vehicle Dependability Study, cars in India continue on improving on long term dependability for the third consecutive year.

In its 9 year this time, the study measures problems experienced by original owners of cars which are 2.5 to 3.5 years old. JD Power evaluated these vehicles in over 169 problem symptoms across 9 vehicle categories. (Hint: A lower PP100 rating is better).

Overall vehicle dependability has made huge gains over the last three years with total reported problems standing at 185 PP100 in 2016, improving from 206 PP100 in 2015 and 218 PP100 in 2014. The proportion of owners who had taken their cars in for unexpected repairs has also declined since 2014. It is now down to 27 per cent as against to 37 per cent back then. While diesel vehicles still have more problems than petrol cars, but gap between them as reduced from 29 PP100 to 27 PP100.

Compared to 2015, vehicle owners report fewer problems with driveability in 2016, with fewer issues related to strut/suspension/shock absorber and excessive or uneven tyre wear being reported.

And here is the 2016 Vehicle Dependability Study Ranking: