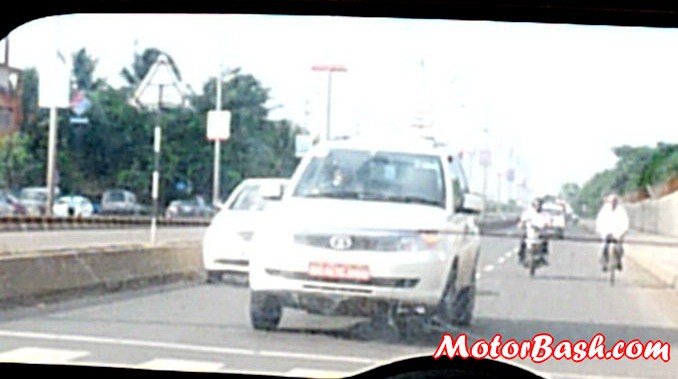 If you have been glued to over coverage, we have brought to you as many as…well at least two spottings of Safari Storme after its launch. In one instance, the mule was clearly identifiable as the military version of the SUV.

In another, we spotted two mules at a few meter distances from each other. One of the mule was running on bigger alloy wheels from Aria but that was about it! In another development, we have managed to snap another test mule of Safari Storme passing by near Tata’s Pune plant.

Actually, these are a few week old snaps and we spied this mule alongside the facelifted Aria we had reported about earlier. We know that Tata is already testing the Aria automatic (MotorBash conclusively busted it. Pics here) and we have the confirmation that there are more than one Aria AT mules running around.

If you carefully analyse, Tata has  gradually been pushing Storme up the ladder over Aria (or the vice-versa!). Now there could be a possibility that Tata may be testing the following: 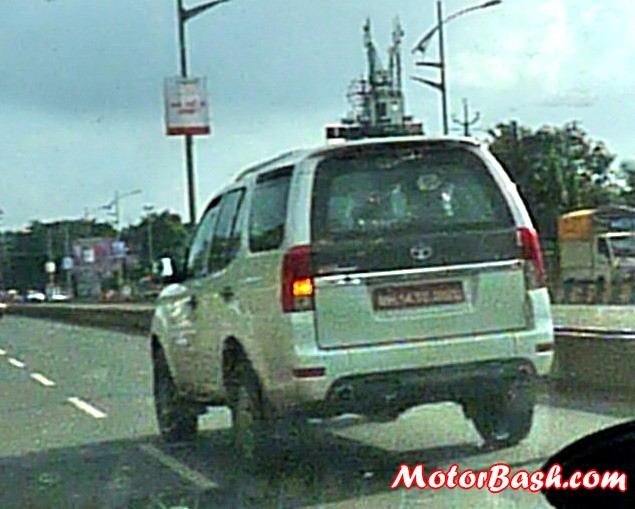 Possibilities of this being a regular endurance test car are low since it makes not much of a sense testing exactly the same car in exact same specifications for a year after its launch. There were reports that Tata is preparing a more loaded Safari Storme a few months back and there is almost a certainty that Automatic Safari Storme is coming to our shores soon, along with Aria.

Which one is this mule, we can not really claim anything. But one thing is for sure, there is a lot that is cooking at Tata’s stables and Storme needs a lot of ammo to slug it out against the more contemporary rivals in the market.

…And then there is the upcoming Mahindra XUV500 W4!