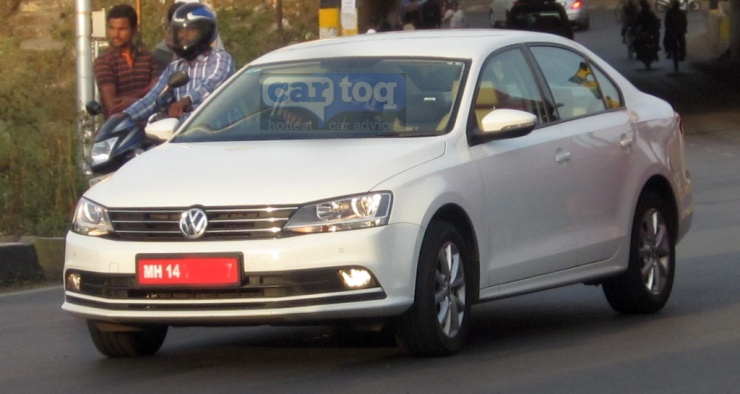 Volkswagen showcased the new Jetta facelift at the 2014 New York Motor show and the car is already on our roads testing for commercial launch.

Cartoq.com has snapped the new Jetta under tests in India completely uncamouflaged which hints at the possibility of it getting launched sooner.

In terms of changes, new 2015 Jetta gets a new set of headlamps, refreshed grille, front bumper, rectangular fog lamps, newly designed tail lamps and modified rear bumper. There will be minor enhancements to the interiors are well and this mule is also running around with newer set of alloy wheels.

The new Jetta facelift, when launched, is expected to carry over the same engine options ie 1.4L TSI (138 hp 200 Nm) petrol engine and 2.0L 148 hp 320 Nm) TDI diesel engine with some tweaks which may increase the power and torque figures. The transmission options 6 speed manual and DSG are also expected to continue.

This facelift for Jetta is a mid-life niptuck and is expected to be Volkswagen’s first major launch for the year 2015.

Related: Fancy a 150PS Polo GT or Even Better 192PS Polo GTI? May Come to India!