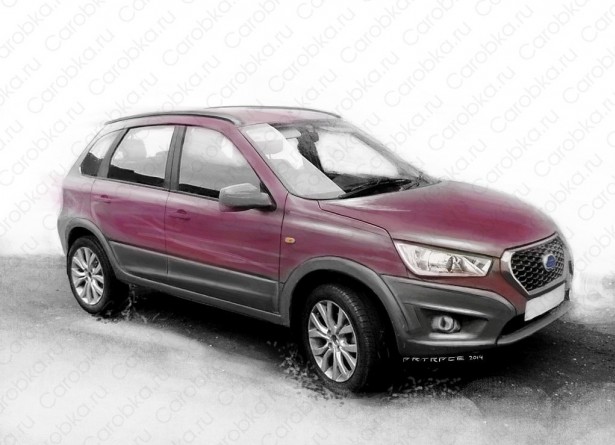 Datsun has not been performing as well as it might have intended to but the company surely manages to be in the news fairly often. In fact, the Russian division is already working on their third model. The first being the on-Do sedan, which is to be followed by a hatchback mi-Do.

The third is the most interesting – crossover based on the hatchback mi-Do, according to Carobka.ru.

A rendering of the crossover has started surfacing on the internet, and we must say, it looks aggressive. The Renault Nissan alliance has become a specialist in selling rebadged cars (at least in India), thanks to the hugely successful Renault Duster and Nissan Terrano.

Engine options are rumoured to be a 1.6L petrol sourced from the Lada Granta sedan, which comes in two outputs, 87 horses and 106 horses. The second being a 1.4L petrol, churning out 91.1PS of power, originally seen in the Lada Kalina.

What is interesting is that Datsun has not officially confirmed the third model for India. The Redi-Go mini crossover  concept showcased at the Auto Expo does hint at the possibilities and there have been a few speculative bits about the same, but no word coming from any Nissan/Datsun official. It must be known that the Russian market gets a hatch, a sedan as well as a crossover which will be kept limited to that market only.

Although no dates of an official unveiling has been set, but the new crossover might be showcased for the first time in the Moscow International Auto Show in August, along with the hatchback mi-Do, and a launch can be expected sometime next year.

So Datsun, what’s going to be the next name after the ‘on’ and ‘mi’?