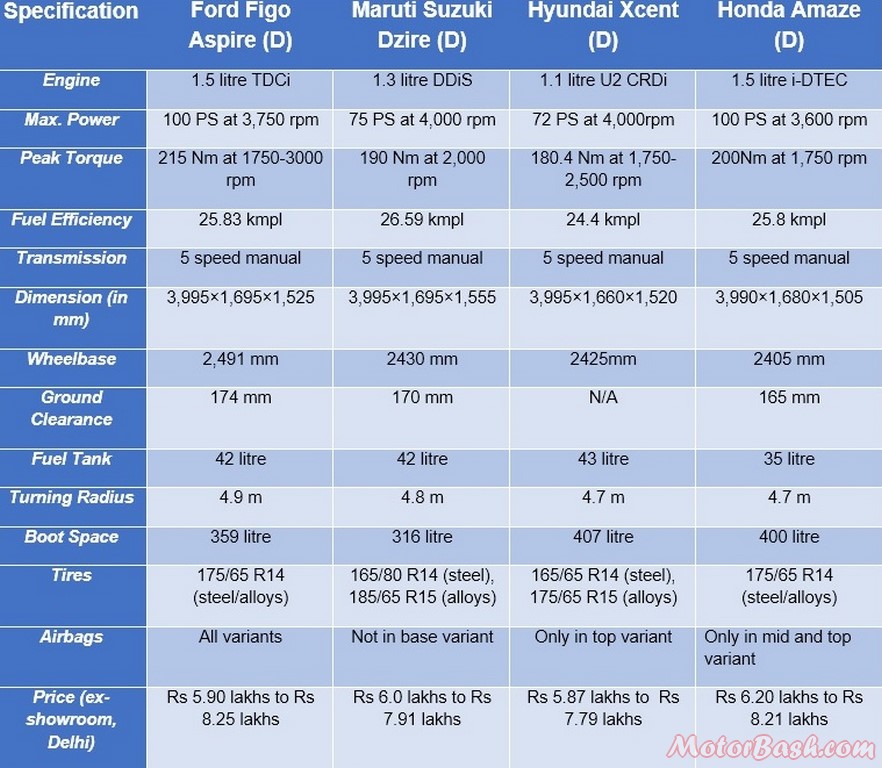 The new Ford Figo Aspire has joined a battle-zone, a war which has been fought so far between the Amaze, Xcent and Zest against the largest seller – Maruti Suzuki Dzire. But wait there is a difference…! Figo Aspire, on a product basis appears to be the best bet out there…

Can the new Figo Aspire help Ford crack the compact sedan formula or will fizzle out amidst the overpowering image of others? We can not answer that at this moment, but let us present to you a spec and price comparison which will help you decide which one of these is better, on paper!

Engines: Figo Aspire gets the most powerful and biggest 1.5 Liter Ti-VCT petrol mill and the regular 1.2 Liter motor also churns out the highest power output along with Amaze. It (the 1.2L motor) also peaks out earlier than the rest…

For diesels, Figo Aspire holds the fort along with Amaze but has a clear advantage in terms of torque. The Xcent clearly is the most underpowered on paper as well as on the roads!

Fuel Economy: The high power for the petrol mills also mean that the Aspire is a little low on fuel efficiency but it is better than Amaze for both the engines. Dzire is the most fuel efficient in petrol engines.

Moving to diesels, Xcent, despite being the least powerful is the lowest in fuel efficiency as well! Above that, it is a call of a kmpl here or there, but with the second highest fuel economy despite the highest power output is one thing which will go with the Ford. Dzire, yet again, walks away with the tag of the most fuel efficient car here.

Dimensions: All the cars adhere to the sub 4 meter length rule and there is not much in terms of dimensions but the Xcent is the smallest car out there and Figo Aspire gets the longest wheelbase. It also has the highest ground clearance among others.

Trunk Space: Accent, despite its smaller dimensions, offers the highest boot space whereas, in order to offer more room upfront to the passengers, Figo Aspire is the second last in terms of space in the third box. 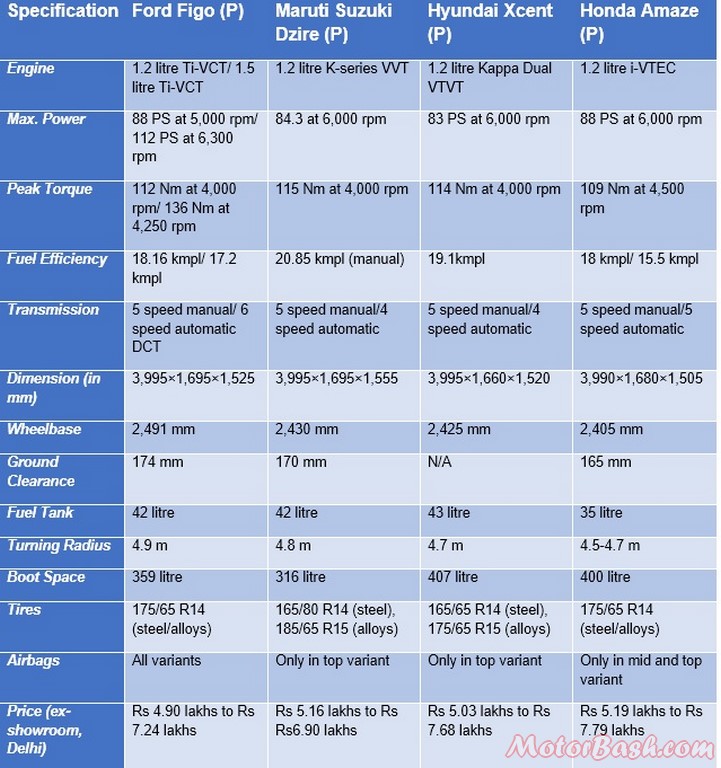 Safety: This is where we feel Ford has taken a big leap – the Figo Aspire is offered with twin airbags from the lowest variant onwards and the top trims get a segment-first 6-airbags! Hyundai, as always, feels, they adhere to the Indian regulations. Dzire offers one from the second variant onwards whereas the Amaze has it in the top two trims.

Price: Have a look at the price table and we surely feel Ford has the best offer here. You get a lot of features plus the safety net of dual airbags in even the base variants and engines that are up there with the best in terms of power/torque and fuel economy.