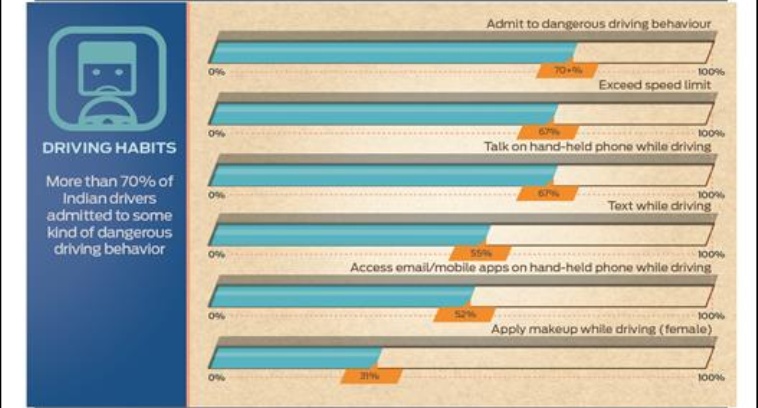 Data from a survey carried out by Ford India has thrown up some surprising revelations.

Upon being asked, a whopping majority of 94% of Indians confidently replied that they were safe drivers, and weren’t engaged in any sort activity while driving which would result in unwanted risk to themselves or other people.

However, upon digging deeper, it was found that almost 70% of the surveyed population themselves admitted to being engaged in unwanted activity while driving.

Here are a few pointers:

While the survey does indicate that we, as drivers, are far from the ideal picture. As highlighted by Ford, the need of the hour is awareness about driver safety. There exists the need for a session or two for drivers conducted by regulatory authorities to highlight safe driving practices. 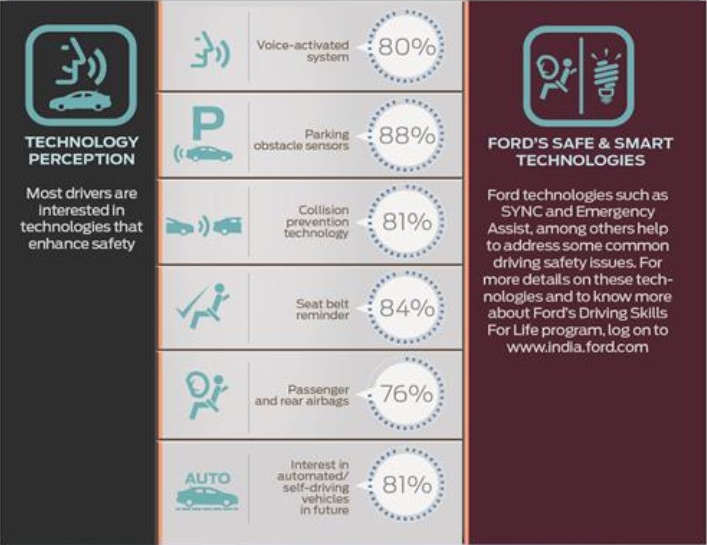 However, the survey has also put forward a facet worth applauding. As the picture above shows, Indians are very much in-sync with modern, driver-friendly technologies and would even like those to be integrated in the cars they drive. Technologies which the surveyed population vouched for included Voice Activated Systems, Parking Assistants, Collision Preventors and Airbags as well. Some even wished for Automated Driving Systems, and would like to see such systems around in the future.

One very convenient, rather important, piece of technology is the clump of Voice-Activated Systems such as Ford SYNC. It has made its way to the Ford EcoSport with some laudable features like assistance in emergency situations. In the event of any fatality, it would automatically make a call for the nearest emergency service providers ( NHAI Patrol, Hospitals and the like ). The biggest advantage is that they would alloy the driver to control the features of the car as well their phone with the help of their…well…voice.

Drivers would not have to take their hands off the steering wheel, and their eyes off the road. Lesser chances of an attention distraction would thus largely reduces the chances for an unwanted eventuality. Don’t you think other car manufacturers should also take an initiative in such driver-friendly technologies??