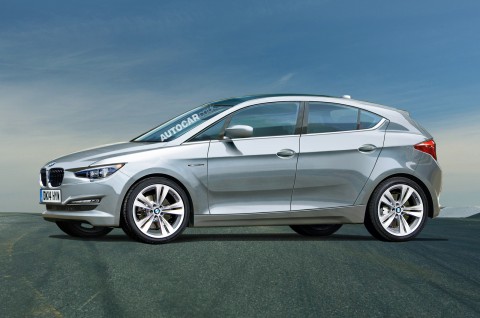 The German Auto Giant BMW has developed an entry-level front-wheel drive 5-Door hatchback, codenamed as UKL (an acronym for the German words ‘unter klasse’, or ‘entry level’ in English). With this new front wheel drive hatch, BMW aims to increase the number of models offered in 1-Series Line-up in UK. This Broader-Front-Wheel-Drive segment is heavily dominated by Mini, so BMW, the parent company also plans to increase the number of products offered by Mini.

This newly developed hatch is supposed to be called as the 1-Series GT and is expected to make its world debut in Paris Motor Show in September 2012, while the expected launch might happen in late 2014. This new member of the 1-Series will compete with the Mercedes-Benz B-Class segment hatchbacks. A newly developed 1.5-Litre 3-Cylinder Turbocharged Petrol Engine will power up this hatch. This 1.5-Litre mill shares the same modular construction techniques used in larger diesel engines. It shares 500cc-individual-cylinder-capacity and other key elements with BMW’s classic 3.0-Litre straight six petrol engines. This 1.5-Litre Petrol Engine will also be used in next generation Mini hatchbacks.