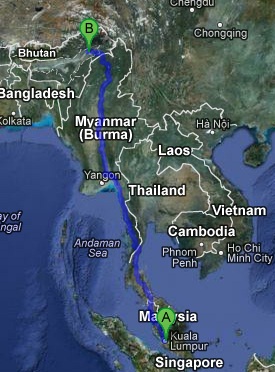 Recently, Prime Minister of India, Mr. Manmohan Singh was on a visit to Myanmar (Burma) after the ‘re-establishment’ of democracy in the country. And with the hard efforts of the country’s people, especially from Aung San Suu Kyi, who is a Burmese socialist and was also the student in Delhi, they held had some talks with the Burmese President Mr. Thein Sein about a road to connect India and Burma so that India can be connected by road to these South East Asian countries.

Keeping political issues aside, let’s talk what We are good at. Roads….. Ah! Freedom….. Finally, Prime Minister Manmohan Singh met the President of Myanmar, Mr. Thein Sein and both of them agreed to open up the boundaries between the countries to lay the four lane wide international highway which can be used to reach from Assam, India to Yangon (Rangoon), Myanmar and eventually Thailand, Combodia and Vietnam.

With all these hurdles cleared, India, the second fastest growing economy in the world, can now easily access the Japanese products from Thailand and can reach the oil reserves in Myanmar and other natural resources around South China Sea as per The Telegraph. All that we know is, it is going to be utter fun to ride or drive all the way from India to these South Asian countries and back, what’s more is, once it will open, We may end up visiting Singapore by road. Who knows? And if you can read the map the right way, you can see that there’s very little space between all these countries in the sea which are actually islands beyond Singapore.

Alright, getting back to reality, the highway is expected to be completed by 2016, atleast in the concerned countries if not India and is also expected to bring wealth to the overlooked seven sisters i.e. the seven North Eastern States. A two lane road, from Assam to Myanmar’s entry is already completed and now the work to make it wider will commence.

Assam to Yangon, the highway will stretch till 375 miles while going to or coming from Ho Chi Minh City in Vietnam will count at around 3,170 kms.

Almost every Indian has a reason now to rejoice if this highway becomes a reality, first is the fact that prosperity, even if in small packets, will come. Secondly, the fact to see the history with our own eyes, and thirdly to visit the places that many of Us left ages ago including the world’s largest place of worship, irrespective of religion or caste, the Angkor Wat temple in Cambodia.