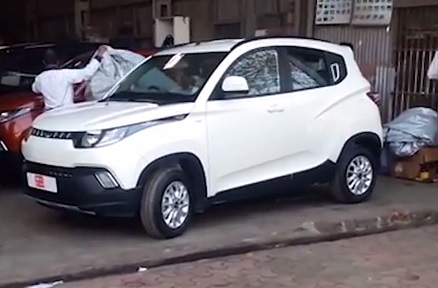 KUV100 Launch is scheduled for tomorrow. We expect it to sit between 3.5 to 6 Lakhs

Mahindra is all set to launch the KUV100 tomorrow from their Chakan plant in Pune and before the launch the compact SUV has been busted by YouTuber Gaurav. The video seems to have been shot at a Mahindra workshop and gives a 360 degree view of the product, revealing for the first time how will the micro SUV look from all angles.

Also revealed is the rear profile – the tail gate will remind you of the Hyundai Grand i10 and gets reflectors embedded in the bumper with chrome outlines. It also gives us a brief sneak on how small/big the SUV is in front of its stablemates like XUV500, TUV300 etc.

Possibly the top end K8 variant, the spied car also sports a rear wiper. Interiors get a three spoke steering wheel, three dials for the air con, pull type hand brake and a gear lever integrated in the dashboard. In an attempt to provide more practicality, Mahindra has also introduced a connected front seat ala the Datsun Go. 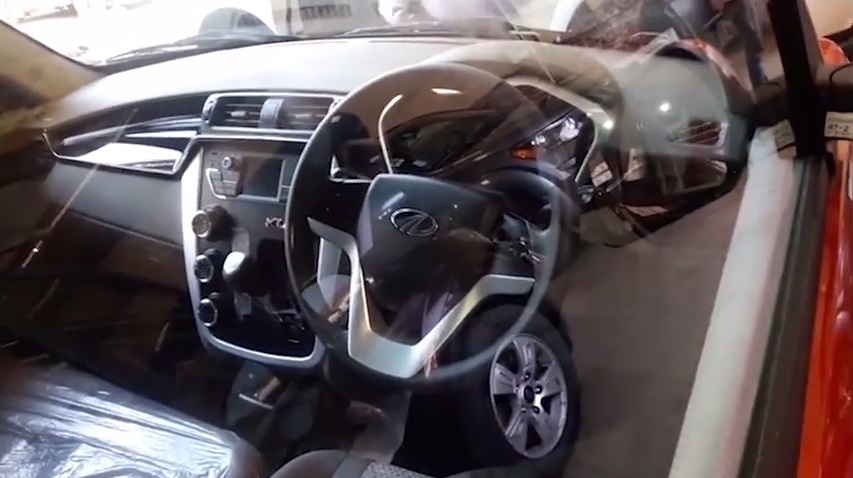 The compact SUV also boasts of ABS as standard and dual front airbags as an optional extra in all variants.

Powering the KUV100 is a new range of 1.2 litre mFalcon engines. The petrol G80 version produces 82 bhp of power and 114 Nm of torque while the D75 diesel churns 77 bhp of maximum power and 190 Nm of peak torque. Prices will only be known when Mahindra announces them tomorrow but expect a surprise…!

Against what you think, Mahindra’s KUV100 is a smaller product and will compete against the B1 and B2 segment hatchbacks like WagonR, Swift, Grand i10 and others. So will it change how we look at the segment?