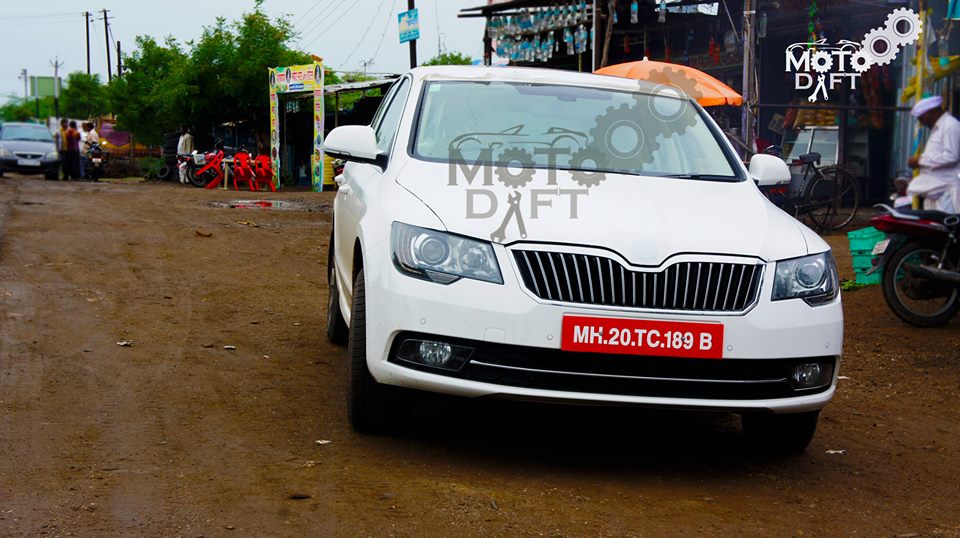 After pulling wraps off the 2013 Octavia in August, as expected Skoda has started testing its D segment sweetheart, Superb. The hot selling near perfect luxury saloon Superb gets a final end-of-life makeover with comprehensive styling upgrades.

The update globally saw production in May 2013, the first spy pics of the Indian version surfaced around July and we contemplated for a post Octavia, festive season launch date. In line with the forecast Skoda Superb mule has surfaced over the web again, testing.

These new spy pics, courtesy Moto Daft show an uncovered Superb in final stages of testing. Like last time, the mule continues to run on hidden logos and badges at the front as well as rear.

The new pics give us a close peek into the visual upgrades at the front and the rear. In its new styling Superb gets a Volkswagen clan styling with cleaner wider grille, redrawn bumpers, front fenders and bonnet along with the all new bi-xenon headlamps featuring LED daytime running lights. The rear gets mighty awesome with its Audi inspired LED tail lights and reworked bootlid.

Though the new spy shot do not reveal any details about the interiors, in line with the international model we expect that, Skoda will bring the same to Indian shores too. The new Skoda is expected to get new fabric combinations and new four spoke steering wheel. The chauffeur oriented saloon will feature electronically adjustable front seat controls for the rear passenger.

New 2014 Superb will now be available in two new colors schemes- metal grey and moon white. There are no changes expected in its engine lineup. It will continue with the familiar 1.8-litre TSI and 3.6L V6 petrol engines along with a 2.0-litre TDI diesel motor.

Initial reports suggested that Skoda may bring this 2014 Superb at the Delhi Auto Expo however, fueled by these constant spy pics we sense launch which is nearer; possibly around October or November of this year.