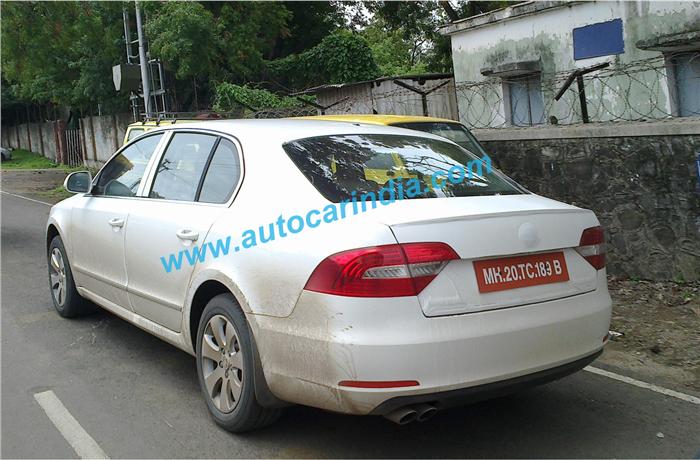 Thanks to the alertness of an Autocar reader, we are now aware that Czech Auto-manufacturer Skoda has started the road trials of the facelifted version of its popular offering Superb.

The upgraded Superb was unveiled internationally on the 3rd of April this year. It features a new engine grille, along with a changed Skoda badge. The front fenders and the bonnet have been reworked, and the facelifted Skoda will boast of bi-xenon headlamps along with integrated Daytime-Running Lights. The rear end has been changed too, with the implementation of LED strips on the slightly-modified tail-lamps.

The interior now has a new four-spoke steering wheel and a new gear lever. Some new color schemes are expected to liven up the mood inside. Interestingly, the front passenger seats can now be moved electronically from the rear. A very useful addition has been an Automatic Reverse Parking System.

However, that’s where the dole-outs end. The facelifted Superb will be powered by the same engine options as earlier. There is a 1.8-litre TSI petrol engine, a 2.0-litre TDI and a 3.6-litre V6 petrol engine. The TSI motor comes with the option of a six-speed manual or a seven-speed DSG Automatic gearbox, while the 2-litre diesel and the 3.6-litre V6 is available with a six-speed DSG only.

There are no official statements about the launch dates here. In all probability, the refreshed Skoda Superb may make its way to the showrooms by this fiscal-end. Interestingly, Skoda is also testing the new Octavia A7 for the Indian market which is expected to make way into our showrooms towards the end of August or early September (Check Spyshots of Octavia A7)