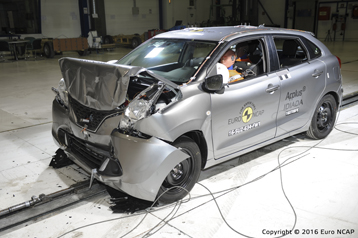 With safety being a rising concern in India, manufacturers have been forced to provide features in cars which can be life saviours in case of an accident. Maruti, India’s largest car maker, for the past few months, has been offering dual front airbags and ABS at least as an option from the entry variants of all their cars.

Their new Baleno hatchback is raking in some good sales numbers (a lot of them are coming at the cost of Swift is another story). The car is all set to be sold in Europe and at a recent Euro NCAP testing, it has received a 3 star rating for the standard variant and 4 star for the safety pack trim.

However, before you rejoice over the safety ratings of the car, let us remind you that the Baleno in India gets just dual front airbags (which are offered as standard). The European version tested gets 6 airbags! For the standard variant, the driver gets good protection except for the chest which might end up with a cracked rib or two. The overall adult occupant safety was rated at 80 per cent while pedestrian safety was at 65 per cent. 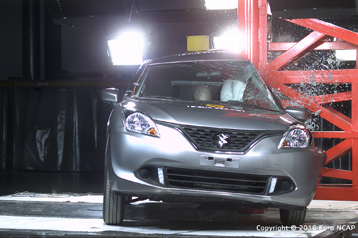 Interestingly though Euro NCAP found that the side curtain airbags did not deploy in the correct manner which will lead to head injuries for the rear seat child passengers. In the safety trim, with radar brake support (which helps in automatically applying emergency brakes) the rating was raised to 4 stars. The adult occupant protection was rated at 85 percent. The radar brake support offered good performance however the system does not recognise pedestrians.

The car also showed that in case of a rear end collision the front seats and head restraints offer good protection against whiplash.

Back in 2014, Global NCAP had tested the base variant of India made Swift (devoid of airbags) and it scored a dismal ZERO for adult protection.