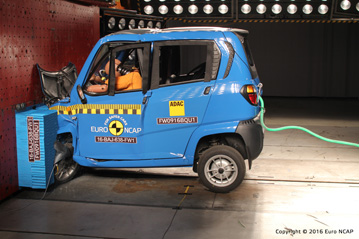 Quadricycles, a new category of four-wheelers are now official but the first vehicle, Bajaj Qute has not been allowed on the roads yet in fear of ‘safety’!

Qute has been the target by car makers, auto rickshaw unions and other parties ever since it was announced, but Bajaj has not given up on the fight yet. In a recent crash testing at the European NCAP, Qute was given a 1 star safety rating which means only one thing – the quadricycle is unsafe for occupants! However, surprisingly, its overall safety rating of 1 is higher than the 0 star rating achieved by cars like Hyundai i10, Maruti Alto, Tata Nano, Volkswagen Polo (non airbag)  and Ford Figo (non airbag) by NCAP earlier. 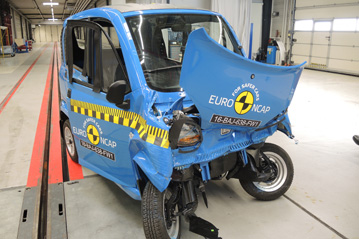 Qute is Bajaj’s first attempt to make a quadricycle and it comes with a 216.6 cc engine producing 13.2 PS of power. The maximum speed is limited to 70 kmph. Introduced in October 2015, Qute finished the financial year 2015-16 with an export tally of 334 units to 19 global markets including the likes of Turkey, Russia, Indonesia and Peru. To boost the growing demand from exports the facility at Waluj will be ramped up to 500 units in April 2016. Target for the present fiscal is 10,000 units. 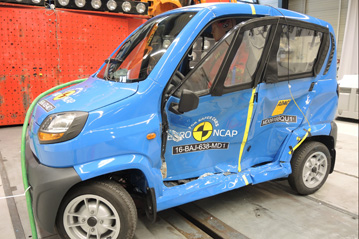 Euro NCAP says that the structure of Qute was found to be unstable during frontal impact test, resulting in a deformed structure. On side impact, the door dislodged itself from the A pillar. Lack of airbags was the final nail in the coffin. The disheartening tail though is that most of the quadricycles tested by Euro NCAP recently have shown similar results, some are even worse.

This crash test establishes that Qute is probably slightly safer than Alto, Nano and non airbag versions of Polo and Figo. Bajaj developed Qute not as a replacement for cars but as an evolution of three wheeled auto rickshaws, allowing a chance for people to move from one place to another in a relatively safe manner.