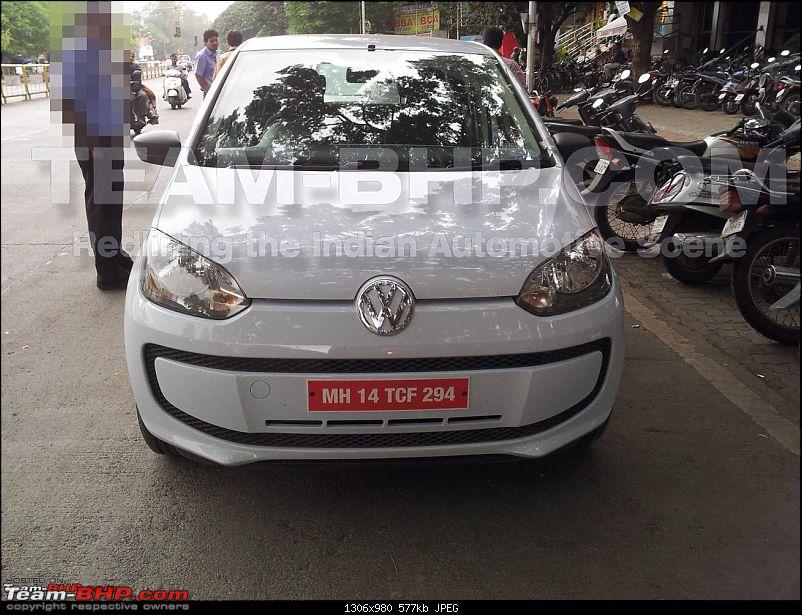 It isn’t too impressing for Volkswagen that they still can not meet the expected sales figures. Pricing could be one of the reasons. So, its the Volkswagen Up which could bring fortunes to the company. Team-Bhp member MandaMax shot a revealing scoop of test mules of Volkswagen UP testing in Pune and that too completely uncamouflaged. This car is not the one which is on sale in the European Market but a trimmed version that can be ideal for Indian car market.

The spotted car is supposed to be the entry model of the line-up as it was missing features like Body-colored door handles, power windows, power mirrors and alloy wheels. But from the pictures, we see that Music system comes as a standard fitment, which is definitely a boon for potential buyers.

The presence of Four Door Version and Right Hand Drive  makes the possibility of its entry to India even stronger. The saloon version of the Up is also expected to be present in the line-up.

Volkswagen Up is powered by a 3-Cylinder Petrol Engine, tuned in two different states. One develops 59 BHP and another develops 74 BHP. A diesel powered Up is also expected in near future. A 5-Speed manual gearbox is standard for all the variants.

If this car makes its presence in India pretty soon and that too with a diesel heart, competitors are sure going to face a tough time! Maruti, Hyundai are you reading!