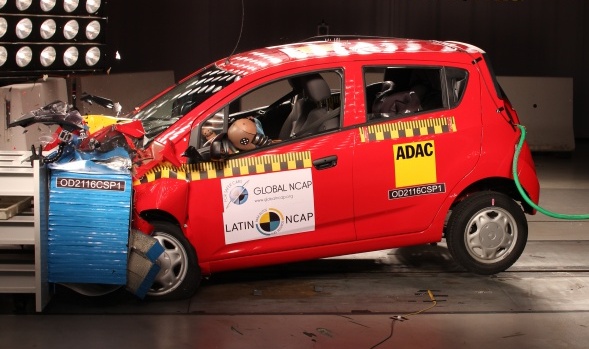 September seems to be a bad month for Indian cars, especially when it comes to crash tests. Post the Kwid and the Mobilio, now it is time for the Chevrolet beat to get its share of bad press. Latin NCAP crash tested the car recently and gave it 0 stars for adult as well as child occupant protection. Sold in Mexico and Columbia, the car is imported to these markets from India. There though it gets a new name, the Spark GT.

Interestingly, the basic version of the car, tested in 2009 by Euro NCAP got a 4 star rating, thanks to the set of 6 airbags! The lack of airbags in the Beat explains the poor result. The structure thankfully was rated as stable in the frontal crash test.

The low score in Child Occupant Protection is explained by the high readings by the dummies during the crash test and the lack of proper instructions for proper Child Restraint System installation. The Spark GT (Beat) was not tested for side impact because the frontal test had already yielded a zero star rating.

This is another blow to Chevrolet’s Indian operations. While sales volumes have not been giving them a favourable result, exports had been trying to bring the balance sheets to a slightly acceptable figure. Now this low safety rating might hamper their plans of making India a major export hub.