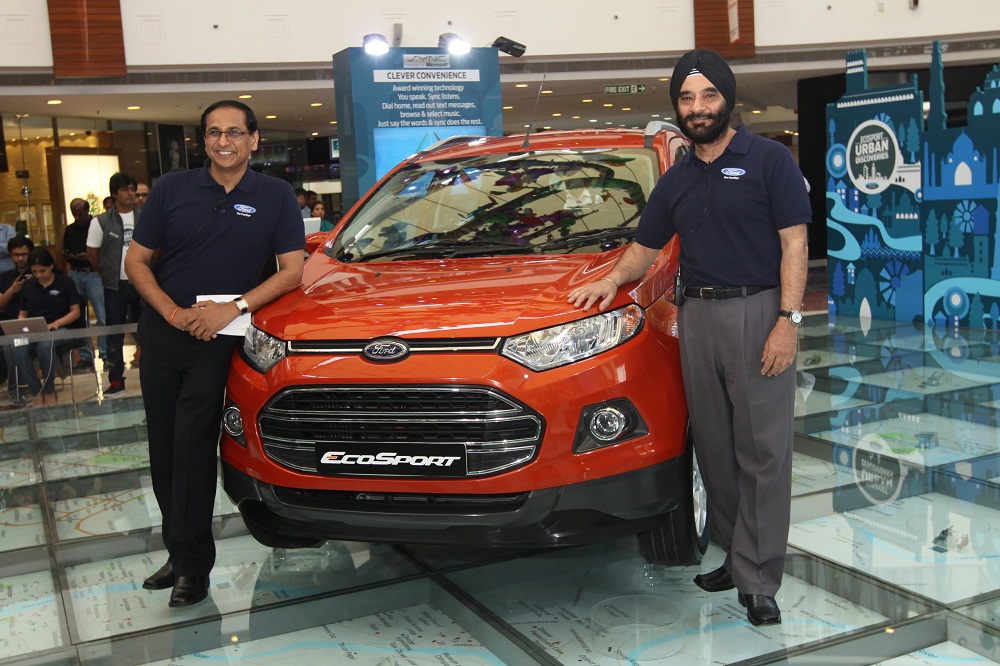 As we told you yesterday about Ford’s plans for EcoSport in today’s event, the company has officially unveiled the compact SUV for the public.

Along with the promotional campaign, Ford has also revealed a few official details about EcoSport. EcoSport will be offered in 4 trims. These trims might be named similar to Figo’s variants as LXI, EXI, ZXI and the top of the line Titanium. As is the trend with Figo, only Titanium variant gets a specific badging as we have seen from a few spyshots.

As we have been talking about, Ford EcoSport will not offer the 1.5L petrol mill on the manual transmission version of EcoSport. Instead, the Automatic transmission EcoSport will come powered with this petrol engine which is shared with new Fiesta.

In the regular manual versions, EcoSport will be offered with a 1.5L diesel engine (shared with Fiesta) along with the debut of 1.0L Ecoboost petrol engine. Both the 1.5L engines will be locally produced whereas the 1.0L Ecoboost will be imported for now.

Of what can be extracted from today, Ford will NOT launch the EcoSport any soon. Though there is no official confirmation, but it appears that the launch will take place after the Urban Discoveries Promotional Campaign gets over, as we had predicted! Ford has also not talked about any pricing details about EcoSport

As for now, Ford is running the Urban Discoveries Campaign wherein you can be one of the 100 lucky winners to drive the EcoSport. This customer experimental drive will take place in May 2013. With today’s event, Ford has opened EcoSport Urban Hub in Mumbai and Delhi.

Similar exercise will take place in the remaining 10 cities which include Bengaluru, Chandigarh, Kochi, Ludhiana, Chennai, Jaipur, Hyderabad, Ahmedabad, Pune and Kolkata. EcoSport Urban Hub is an interactive zone dedicated to details of EcoSport in a targeted mall which will include a 3-D Ecoboost engine holocube, a SYNC simulator among other details.

In these cities, Ford will keep EcoSport on display which will provide and opportunity for interested customers to see, touch and feel the EcoSport every weekend uptil the compact SUV is launched finally.

For details on EcoSport Urban Discovery Campaign, you can visit its official site.