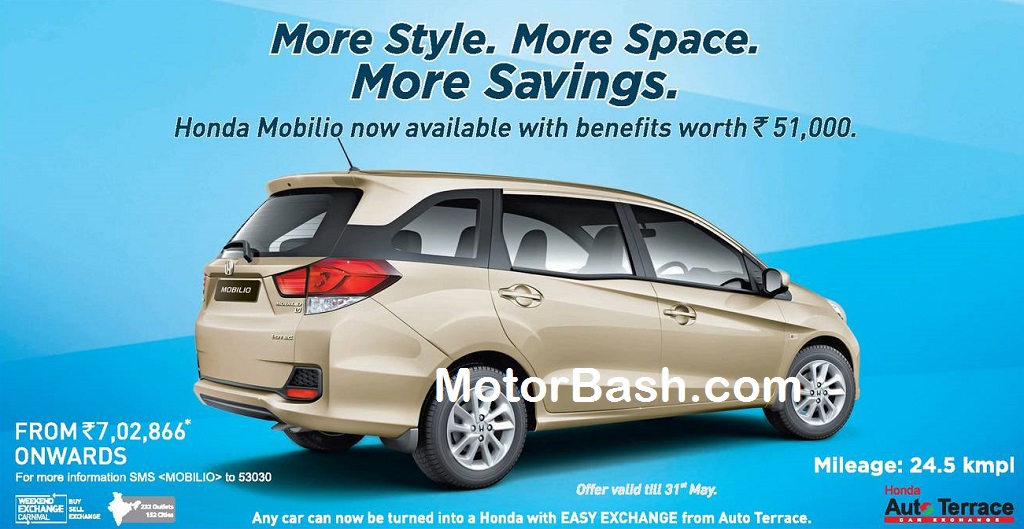 Unlike Maruti and others, Honda is not generally known to dole out extensive offers or discounts on their cars. But it appears that things are changing! The company is offering benefits worth Rs 51,000 on their Mobilio MPV for a limited period and this is the first time the MPV has been promoted for such kind of offers in India. These 51,000, according to a Honda showroom, break up as…

If we relate this to the falling sales of Mobilio, this hints at the possibility that Honda is facing the heat of the competition. As we reported a few days back (here), for the month of April 2015, Mobilio registered lowest ever sales of only 689 units and was outdone by the new Renault Lodgy.

On the other hand, Ertiga continues with its over 4000 sales month after month and will also get a facelift sometime this year to keep things fresh and in headlines. Ever since its launch, we believed that Honda overestimated Mobilio’s prices and it should have been cheaper variant by variant!

Also Read: Honda’s Upcoming Compact SUV to be a 7-Seater; to Rival Duster

Going may get even tougher for Mobilio once Chevrolet enters their officially confirmed Spin MPV sometime next year which, we believe, will be bang in its (Mobilio’s) territory. Interestingly, Mobilio is the only car from Honda’s new lineup which is NOT doing well. The new upcoming localized Jazz is also expected to set new records of sales…! By the way, this offer is valid till 31st May…